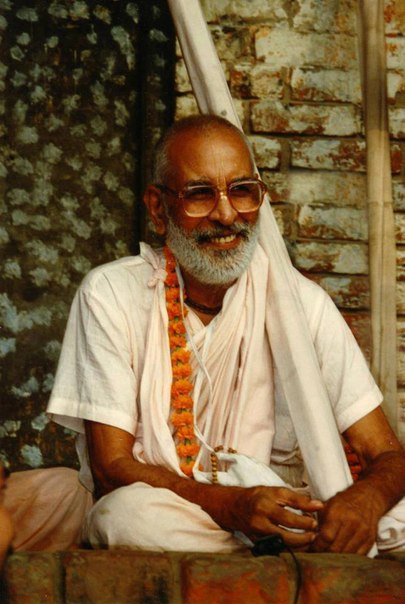 I offer my obeisances over and over again unto om visnupada Sri Srimad Bhaktivedanta Narayana Goswami Maharaja, who is very dear to Gaurahari and Sri Krsna, or to that Krsna whose form is golden-coloured (Sri Sri Radha Vinoda-bihari).

He is exceptionally enlightened in the mellows of service ( seva rasa)under the keen guidance of Srila Rupa Goswami, he bestows the raga bhakti specific to Vraja, and he is one of the greatest world preachers. I offer my obeisances repeatedley unto that king among sannyasis.

As Sri Ramana Manjari, in a secret grove, he serves Sri Yugala Kisora in the festive company of Vinoda Manjari. I offer my obeisances unto that highly enlightened master Srila Narayana Goswami Maharaja. *
* (Used with kind permission of Srimad Bhakti Sarvasva Govinda Maharaja)

I most humbly offer my full prostrated obeisances again and again in the dust of your holy lotus feet. On this occasion of the 100th anniversary of your appearance in this world, I am given great cause to remember you and consider your causeless mercy which flows amongst all living beings like the wide, powerful and unstoppable Ganga.

It is impossible for a conditioned and fallen soul like myself to recount even a small portion of your glories adequately. However, due to the significance of this most noteworthy occasion and due to the fact that, unworthy as I am, you very compassionately accepted me as an aspiring disciple, I must try my best to express something of your greatness and in doing so purify myself.

On the occasion of Kartika 1996 I was able to hear your Harikatha for the first time in this lifetime. I immediately had the impression that I was in the company of an exalted follower of Sri Caitanya Mahaprabhu, and after a long time of having no proper guidance in my life, I felt such great relief knowing that I was sitting in the assembly of the head of our sampradaya.

Your association gave me a rapid transformation from a dissolute state to one of optimism, happiness and hope, as you patiently over the following years gave instruction, guidance and encouragement to your followers. You have the power to instill enthusiasm and attraction for those who meet you into the doctrines of pure devotion in the sweetest and deepest way. Personally you have given me so much, Srila Gurudeva, that I cannot quantify it, nor ever repay you for it - only that I aspire always to express my eternal gratitude at your lotus feet. You can give the greatest treasure, and you cause the whole world to experience the flow of affection towards the lotus feet of the Divine Couple.

Just as Sri Caitanya Mahaprabhu had the potency to transform the hearts of all, even wicked and dangerous yavanas, and bestow upon them humility and Krsna prema, you, too, being His representative are able to, just by your words or touch or a glance, transform the suffering hearts of the unfortunate souls of this world and bestow the saffron particles upon their hearts of the happiness which is Krsna prema.

"Srila Narayana Maharaja is expert in describing Krsna-lila. He is endowed with the qualities of magnanimity and sweetness, and he is the best of the great souls. Because he is always relishing Krsna's sweetness, he is able to freely distribute that sweetness to others."

You have quoted Srimad Bhagavatam as follows:

"Simply by giving aural reception to this Vedic literature, the feeling for loving devotional service for Sri Krsna, the Supreme Enjoyer, sprouts up at once in the heart to extinguish the fire of lamentation, illusion and fearfulness."

"Oh my Lord, Your devotees can see You through the ears by the process of bonafide hearing, and thus their hearts become cleansed, and You take your seat there. You are so merciful to Your devotees that you manifest Yourself in the particular eternal form of transcendence in which they always think of you."

Dear Gurudeva, we know that you are such an exalted and pure devotee, referred to here and that Krsna always protects and empowers you, as He dwells in your heart. When you were a police officer in your youth, Krsna Himself appeared in your own form at your place of duty in order to cover your responsibility. The reason for your absence from your job on that occasion was that you had become so absorbed in hearing Harikatha of Srimad Bhagavatam that you had lost all track of time and space and had forgotten to go to your job.

"For those who are always devoid of material desires, who are always absorbed in thoughts of Me, and who always worship me completely with one pointed devotion, I Myself carry their necessities and preserve what they have."

You also describe the story of Arjuna Acarya who whilst commenting on this verse doubted whether the Supreme Lord would take the trouble to personally intervene to assist an individual jiva, and how Krsna Himself came in person to demonstrate His commitment to His ananya-bhaktas.

This is beautifully described in your glorious publication of Bhagavad Gita, which should be valued as one of the most important publications of all time, not withstanding the host of other literary treasures that you have left for the advancement of the people of this realm. Lord Krsna Himself showed that you are His especially dear ananya-bhakta by appearing to cover your absence from your official police post. In the same way, Srimati Radharani in Seva Kunja (Vrndavana) personally sent her maha-prasadam to you, instructing Her pujari that you were Her very dear and intimate associate.

I also remember you personally describing that during your youth, when your bhakti was oriented more towards Sri Ramcandraji, Sri Sita, Sri Rama, Sri Laksmana, and Sri Hanumanaji all gave you Their darshan by descending towards you from the heavens on a chariot. We as conditioned souls cannot imagine your good fortune and sublime nature as an eternal associate of the Lord who is always embraced by His mercy - Krsna-lingita-vigraha.

Once you said in Sri Navadvipa Dhama that the number of people in this world who have fully understood and realised the philosophy and teachings of Srila Rupa Gosvami can be counted on one hand. At that time I understood that you are among that small and elite group of the most elevated and exalted intimate associates of Sri Rupa Manjari - and that in your pastimes as a sadhaka you are the world's leading proponent of Srila Rupa Gosvami, who has been described as the second self of Sri Caitanya Mahaprabhu.

You have been awarded the title of Yuga Acarya by the top assembly of religious pandits in Mathura and Vraja, who also recognised your unmatched contribution to preaching and preserving pure Vraja culture, promoting and renovating the Lord's holy dhamas and spreading the doctrine of pure bhakti around the world.

In your personal behavior and practice you are faultless and are always seen either in the act of glorifying Sri Sri Radha Krsna, spreading in the most selfless way pure loving devotion to them (prema-mayi seva), or fulfilling the purport of the religious practice of our time by constantly chanting the holy names of the Divine Couple and explaining in great depth Their significance.

"In this age of Kali there is no other religious principle than the chanting of the Holy Name, which is the essence of all Vedic hymns. This is the purport of all scripture."

"It is the nature of the Hare Krsna maha mantra that if any one chants it, he immediately develops his loving ecstasy for Krsna."

During your class on February 8, 2005 in Hilo, Hawaii, you spoke as follows: "The nature of the pure Vaisnavas in our parampara is that when they actually sprinkle their mercy upon you, you will enter raganuga bhakti. Under the guidance of Sri Rupa Gosvami you will serve Sri Sri Radha Krsna with an inclination towards Srimati Radhika. This truth is very confidential, and I have brought you here to understand it. Following in the line of our acaryas and by their desire I am revealing many things about raganuga bhakti. No one else is speaking like this. All are silent but I am not silent. In our entire parampara hardly anyone will give this. I want you all to have raganuga bhakti. To get it, however, you will have to surrender."

You have also revealed to your listeners the great significance of the verse of Srimad Bhagavatam (10.33.39):

"A sober person who with full faith, continuously hears or describes Bhagavan Sri Krsna's transcendental rasa lila with the damsels of Vraja will first attain para bhakti for the lotus feet of Bhagavan. Thereafter he will quickly conquer his senses and become forever free from the disease of the heart worldly lust."

You have stated that with the words bhaktim param bhagavati pratilabhya, Srila Sukadeva Gosvami has given the blessing that those persons mentioned will attain para-bhakti, or the topmost bhakti, but in the form of the highest rasa, madhurya bhava. They will become gopis, just as the personified Srutis did. Howeverm rather than taking a very long time to do so, as in the case of the personified Srutis, it will happen in a very short time. Instead of labouring hard to remove the anarthas of the heart, such as lust, over a long time as is done by the Brahma-jnanis, one who patiently hears the katha of rasa-lila will have his anarthas automatically destroyed and will attain the topmost prema, gopi-prema.

You are truly bhuri da jana, the most compassionate of persons, and repeatedly instructed us to fix our hearts and minds on our aim and object - to attain the position of a palya-dasi of Srimati Radhika, to be fully sva-paksa and tadatmika with the exclusive service of Srimati Radhika, and by so doing you have pointed out the path to the highest bliss.

We pray always at your lotus feet that you will give us your loving shelter and allow us to be counted as one of your own. Please request Srimati Radharani to place our names in her special book of servitors and allow us to assist you always in your service of the Divine Couple in the groves of eternal Vrndavana, in the yutha of Sri Radha, in the gana of Sri Lalita, under the anugatya of Sri Rupa Manjari.

Praying humbly that you may accept this offering from this insignificant and foolish person and that Sri Sri Gauranga-Nitai by your grace look favourably upon me.