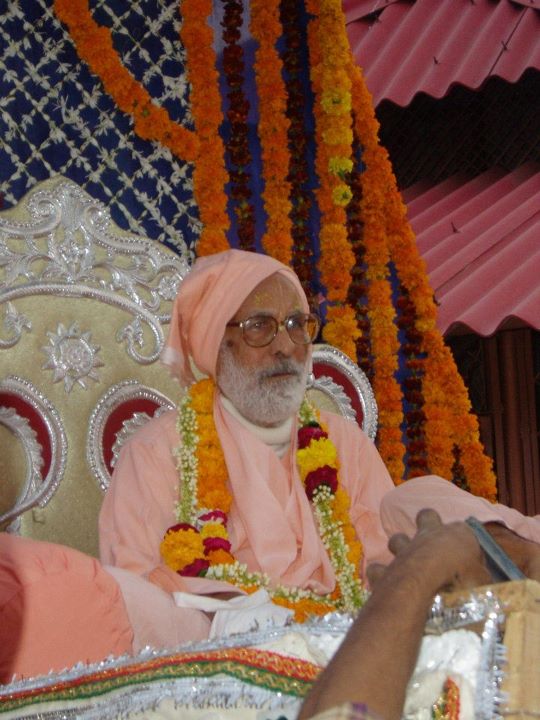 Below is a humble attempt for an offering to the lotus feet of my parama-gurudeva, om-nitya-lila pravista astottara-sata Sri Srila Bhaktivedanta Narayana Gosvami Maharaja.

From my heart I know that parama-gurudeva is a very powerful personality, his presence is wondrous, his qualities shine through his disciples and I see always their strong guru-nistha and unending guru-seva which is very inspiring.

I thank him so much for all he has given to us. Even though I have no realization, my heart is captured, captivated... my deepest deepest gratitude 🙏

One of his dear disciples is my Gurudeva, om visnupada astottara-sata Sri Sripad Bhaktivedanta Vana Gosvami Maharaja, and although I am such a rascal, always in his vani, his harikatha, he is glorifying his Gurudeva, Srila Narayana Gosvami Maharaja. I pray that in some life I may be given the grace of guru-nistha so I can be a tiny fraction as strong as he is in preaching for Lord Caitanya Mahaprabhu and his Gurudeva.

I always felt scared of parama-gurudeva, for a long while. And then one day, I heard his voice, it shocked me that as yet I had not heard from him at this time!

His voice, so kind, so gentle and loving...my heart melted.

His harikatha is sublime, so relishable tbat I pray for hundreds of lifetimes to absorb it all.His singing of gopi-gita is from depths of a transcendental ocean I cannot imagine, but the heart, stirs so.

So, on this very auspicious day of parama-gurudeva's divine 100th appearance, I feel a deep privilege to be able to pray most fervently from my heart to become a good disciple, and for the mercy to surrender to Guru, the exalted Vaisnavas and to Sri Hari. I pray too for, in one lifetime, to be eligible for the highest attainment, manjari-bhava , to be a palya-dasi of Srimati Radhika 🙏