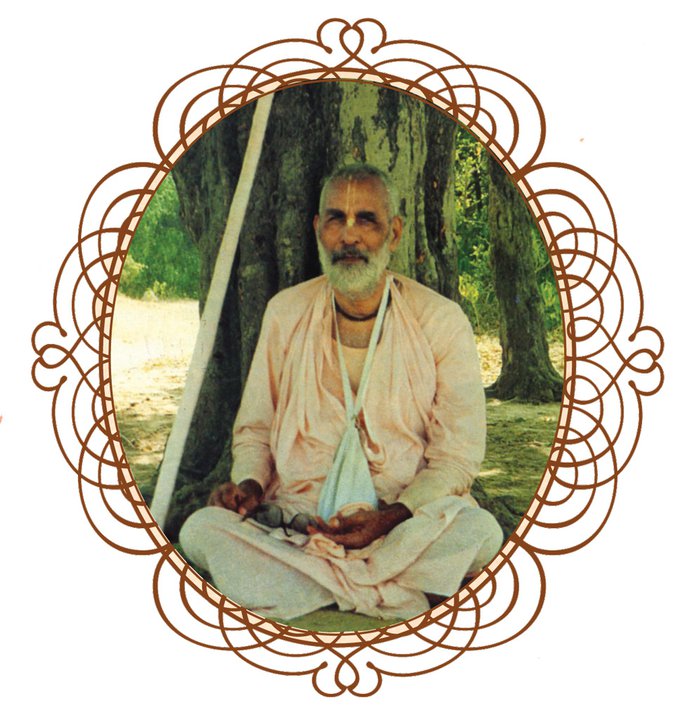 C – Counting Down. When my Guru Maharaja Srila Bhaktivedanta Vamana Gosvami Maharaja departed from this world, we reconciled and consoled our mind. One guru maharaja has gone, but another has come; somehow, we maintained our life. But in the last week of 2010 when Srila Gurudeva departed from this world, all of his followers, disciples and sevakas became completely morose. Some wanted to give up their life or even give up the bhakti line. Why? We were so unhappy.

By the inspiration of Srila Gurudeva, an idea came: "Oh! We should not give up the bhakti line." Why not? Because when Krishna departed from Vraja and went to Mathura, at that time he told the vraja-gopis, “āyāsya iti dautyakaiḥ (I will return)" (Srimad Bhagavatam 10.39.35). He told that through the messenger. So, any vraja-vasi, especially the gopis, could never give up their life. They thought, “Krishna said that He’ll come. If we give up our life, when Krishna comes back, what will He think? Then He’ll be morose.” So, no vraja-vasi gave up their life.

In the same way, the devotees thought, “If we give up the bhakti line, then Gurudeva will not be happy.” C is for counting down. Gurudeva has departed from this world, but now his centennial festival is coming soon. So, C is for counting down to the time to arrange his centennial festival. If we organize it in a grand way and preach his mission, then he’ll be very happy and bless us from the core of his heart.

E – Eagerly waiting for the grand festival. The whole world is praying for that day to come, and soon the wait will be over.

Another meaning of E is that Srila Gurudeva will enter the heart of the devotees and his disciples. 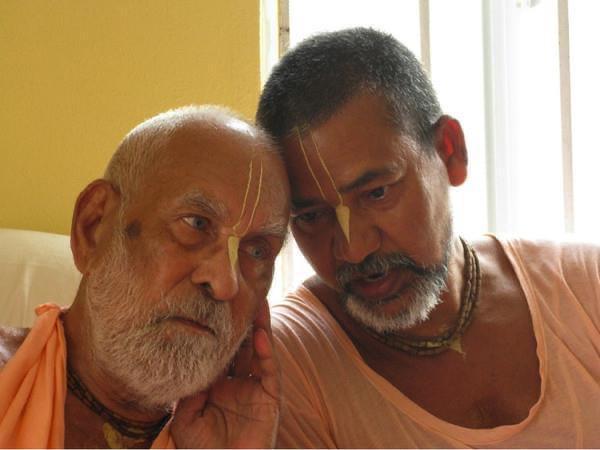 Those who are eternal associates of Krishna are called ragatmika while those who follow them are called raganuga. Previous acaryas had spoken about this, but Srila Gurudeva told clearly that the essence of ragamarga-bhakti is radha-dasyam. Whoever came near Gurudeva understood that the ultimate goal is radha-dasyam, i.e., being the palya-dasi (maidservant) of Srimati Radhika - to serve both Radha and Krishna but leaning towards Radha. No previous acarya before Gurudeva told this. Mahaprabhu brought Gurudeva for this reason, i.e., to preach this radha-dasyam.

E – Empowered by Srila Gurudeva to read his books and enter deeper into their essence. To become expert in tattva-siddhanta and especially rasa-siddhanta.

N – New, new plans to glorify Srila Gurudeva internationally. By this glorification, our bhakti-lata (creeper of bhakti) will be nourished and cherished.

I – Impactful preaching internationally. We have to preach together, not separately. It is mentioned in the scriptures – sanghe sakti kalau yuge. If we work as a team, we’ll be successful. Not only in kali-yuga but in all yugas. Lord Rama can finish Lanka, Ravana, Kumbhakarna, and others by just one arrow, but to show this team power, He made a bridge over the ocean, taking the help of monkeys and bears, and invaded Lanka. In Dvapara-yuga, Krishna made a team to steal butter and perform other activities.

L – Loyal towards Srila Gurudeva. Srila Gurudeva used to say, “Loyalty is the key to success.” So, the more loyal we are, the more Gurudeva will be pleased towards us. We should promise to render him life-long service.

F – Fearless. We have to preach Gurudeva’s glories fearlessly. Why is fear coming? It is mentioned in Srimad Bhagavatam (11.2.37), bhayaṁ dvitīyābhiniveśataḥ syād īśād apetasya viparyayo ’smṛtiḥ. When we are absorbed in anything other than Krishna or related to Krishna, then fear comes.

E – Eagerness. We have to be very eager to preach Srila Gurudeva’s mission globally. Kab lo miloge syama, kab lo miloge cit cora. The gopis are eagerly waiting when Syama will come and meet them, thinking, "When will cit-cora, the stealer of my heart, come?" In the same way, we have to eagerly anticipate the arrival of the centennial.

S – Steadiness towards Gurudeva and the guru-parampara.

“By regular attendance in classes on the Bhāgavatam and by rendering of service to the pure devotee, all that is troublesome to the heart is almost completely destroyed, and loving service unto the Personality of Godhead, who is praised with transcendental songs, is established as an irrevocable fact.”

We should serve Bhagavatam everyday. There are two bhagavatas – one is the book form while the other is the devotee form. The devotee bhagavata is of three types: (1) bhagavat-parsada-deha-prapta (those who have obtained perfected spiritual bodies as eternal associates of the Lord), (2) nirdhuta-kasaya (those who have thrown off all material impurities), and (3) murcchita-kasaya (those in whom a trace of material contamination still lies dormant). The book bhagavata is of two types: (1) Sri Caitanya Bhagavata and (2) Srimad Bhagavatam. Without the mercy of Caitanya Bhagavata, no one can achieve the mercy of Srimad Bhagavatam. To achieve Krishna’s mercy, Mahaprabhu’s mercy is needed. Likewise, to achieve the mercy of Vraja, the mercy of Navadvipa is needed. It is mentioned:

"If you worship the nine islands of Navadvipa, you are actually worshiping Vrndavana and can easily gain entrance into that confidential place. If you don't worship and take shelter of Navadvipa-dhama, Vrndavana will be very far away from you. If someone will worship dvija-suta (Sri Caitanya Mahaprabhu), the son of the brahmana Jagannatha Misra, that person will attain vraja-nagara Sri Krsna in Vrndavana. If one worships Sri Caitanya Mahaprabhu, who is actually Krsna Himself, in Navadvipa, one is performing complete worship of Krsna. Worshiping Sacinanadana Gaurahari in Navadvipa is as good as worshiping Krsna in Vrindavan. If one does not worship dvija-suta Gaurahari, Lord Krsna will be very far away."

"The message of the Vedas received through guru-parampara is called amnaya. The Vedas and smrti-sastra (such as Srimad-Bhagavatam) which follow the Vedic version have been accepted as authoritative proof, as have different types of evidence such as direct perception, inasmuch as they confirm the Vedic version. From these sources of evidence, the following essential truths are established:

1. Hari is the Supreme Truth.
2. He is sarva-saktiman, possessed of all potencies.
3. He is akhila rasamrta-sindhu, the ocean of all nectarean transcendental mellows.
4. Two kinds of jivas, namely mukta and baddha (liberated and conditioned) are His separated expansions (vibhinnamsa-tattva).
5. The conditioned souls are under the control of maya.
6. The mukta-jivas are liberated from the influence of maya.
7. Everything in existence, whether conscious or unconscious, is a manifestation. of Sri Hari and is simultaneously and inconceivably one with Him and different form Him.
8. Bhakti is the only sadhana (means to attain the goal).
9. Love for Krsna (prema) is the only objective (sadhya).

Svayam Bhagavan Sri Caitanya Mahaprabhu has given instructions on ten types of tattva to the faithful jivas. Of these, the first is the principle of evidence (pramana-tattva), and the remaining nine are prameya-tattva the subject which is established by pramana-tattva." (Dasamula-tattva)

"The Supreme Personality of Godhead, the son of Nanda Maharaja, is to be worshiped along with His transcendental abode, Vrndavana. The most pleasing form of worship for the Lord is that which was performed by the gopis of Vrndavana. Srimad-Bhagavatam is the spotless authority on everything, and pure love of God is the ultimate goal of life for all men. These statements, for which we have the highest regard, are the opinion of Sri Caitanya Mahaprabhu. We are not interested in anyone else's opinion."

I – Intelligent. When we surrender to Gurudeva completely, then intelligence will come automatically. Why? Krishna said in Bhagavad Gita (10.10), dadami buddhi-yogam tam yena mam upayanti te ("Whoever surrenders to Me, I give them buddhi-yoga”). Because we cannot surrender to Krishna directly, we have to first surrender to a bona-fide guru.

A – Anxious. We are waiting anxiously for this festival.

Aspiring for the mercy of Srila Gurudeva,