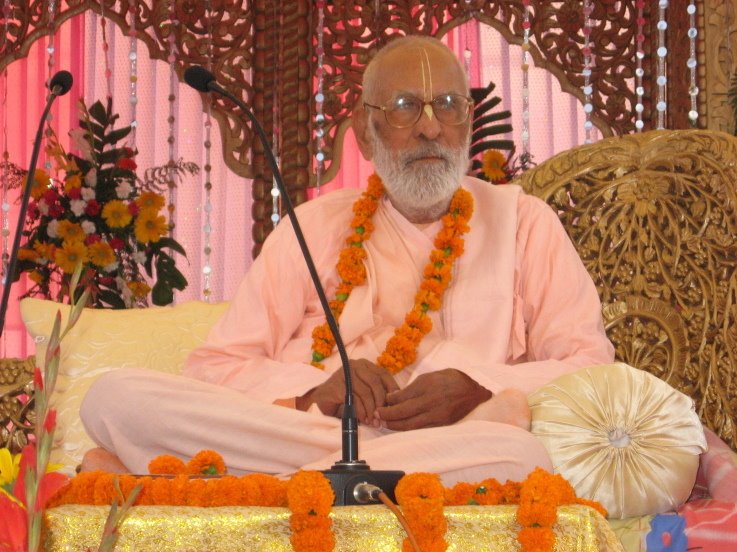 The acarya is eternal. He lives through his books and the voices of his spiritual descendants who faithfully repeat his teachings. Those who devotedly adhere to his spiritual instructions feel his presence. By preaching his message with conviction a disciple arranges for his spiritual master to manifest before an audience and enlighten those who hear that message with sincerity. An acarya is first and foremost a sad-sisya, an eternal student of his gurudeva, always remaining at the feet of Sri Guru with total unconditional humility. This mood of submissive service qualifies the disciple to be honored with the title of spiritual master, acarya.

Srila Bhaktivedanta Narayana Gosvami Maharaja, Srila Gurudeva, is a perfect example of a sad-sisya who performed the role of sad-guru as a submissive service to his diksa-guru Srila Bhakti Prajnana Kesava Gosvami Maharaja and his siksa-guru Srila Bhaktivedanta Swami Prabhupada. Srila Gurudeva demonstrated by his outstanding example how to be a disciple that serves in a mood of completely submissive devotion to his diksa and siksa guru’s instructions and at the same time never compromising on the orders given by them. Thus, Srila Gurudeva taught us by his example that guru-nistha is the backbone of bhakti.

Srila Narayana Maharaja translated the books that his diksa-guru ordered him to render from Bengali into Hindi and then had some of those translated into English, such as Jaiva Dharma, Bhakti Tattva Viveka, and Brhad Bhagavatmrta. He also created Hindi purports and commentaries on many classical texts like Catur Sloki Srimad Bhagavatam, Rasa Pancadhyaya of Srimad Bhagavatam, Bhagavad Gita, Raya Ramananda Samvad of Caitanya Caritamrta, and Brahma Samhita, many of which were translated into English. He gave us many books based on lectures that he delivered in English, which were centered around various themes of bhakti: The Way of Love, The Nectar of Govinda Lila, Beyond Vaikuntha, Bhakti Rasayana (based on a portion of Brhad Bhagavatamrta), Secret Truths of the Srimad Bhagavatam, The History of the Rathayatra, and many more.

Srila Narayana Maharaja reinvigorated the Badger project, known as New Braja, which was started by some of Srila Prabhupada’s disciples. He established a yearly festival there with worship of Giriraja Govardhana that attracted over 1000 devotees every year. He performed festivals like this on the east coast of the USA in Florida and elsewhere. He performed festivals in Europe, Russia, Australia, Hong Kong, South Africa, and Brazil, celebrating the teaching of Srila Rupa Gosvami and the Gaudiya Vaishnava sampradaya, elucidating for the devotees the deep inner meaning of those teachings.

Srila Narayana Maharaja established temples in Govardhana, Vrndavana, Navadvipa, Puri, Bangalore, London, Brazil, and Houston for the worship of Sri Sri Radha Vinoda-Bihari Mahaprabhu and taught us the intimate glories of these deities and the rasika pastimes connected with the divine couple in this and other manifestations. Srila Narayana Maharaja's glories of preaching all over the world are unlimited.

Personally, Srila Narayana Maharaja pulled me out of the dark well of married life and brought me back to the lotus feet of my Srila Prabhupada, engaging me in his service. He blessed me to understand the intricacies of this process of pure bhakti and blessed me to be a sannyasi and preacher for the sankirtana mission of Sri Caitanya Mahaprabhu. There are numerous intimate exchanges that I had with him, but one story above all stands out in my mind and heart.

I related this story to Srila Narayana Maharaja and he was very pleased. When the first day of Kartik came and Srila Narayana Maharaja performed the worship of Srila Kesava Maharaja to honor his disappearance day, Srila Narayana Maharaja garlanded the photographs, applied sandalwood paste, and performed the arati to his beloved gurudeva. At the end, he offered puspanjali flowers at the feet of Srila Kesava Maharaja and the paramapara. When he finished, he turned around and looked for me behind him in the crowd. Upon seeing me, he called me to come stand next to him and he took my hand and filled if full of flowers. Then he said, “Now you offer flowers to my guru-maharaja.” This was significant, for he had given me access to his beloved gurudeva and I was overwhelmed with emotions upon receiving this blessing. Yet he understood my heart perfectly, telling me once, “I know that in your heart is only your Swami Prabhupada.” I told him that I saw my Srila Prabhupada in him. He said that is all right. However, I knew that whatever progress I had made in the second part of my life was due to his association and bringing Srila Prabhupada back into my life in a deep and meaningful manner.

On this centennial celebration of Srila Bhaktivedanta Narayana Gosvami Maharaja, I am offering this puspanjali of his glorious preaching work as a world acarya and praying for his mercy that I might again make some advancement in the process of devotional service. 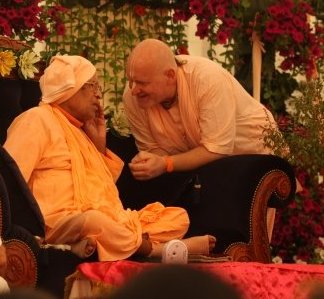