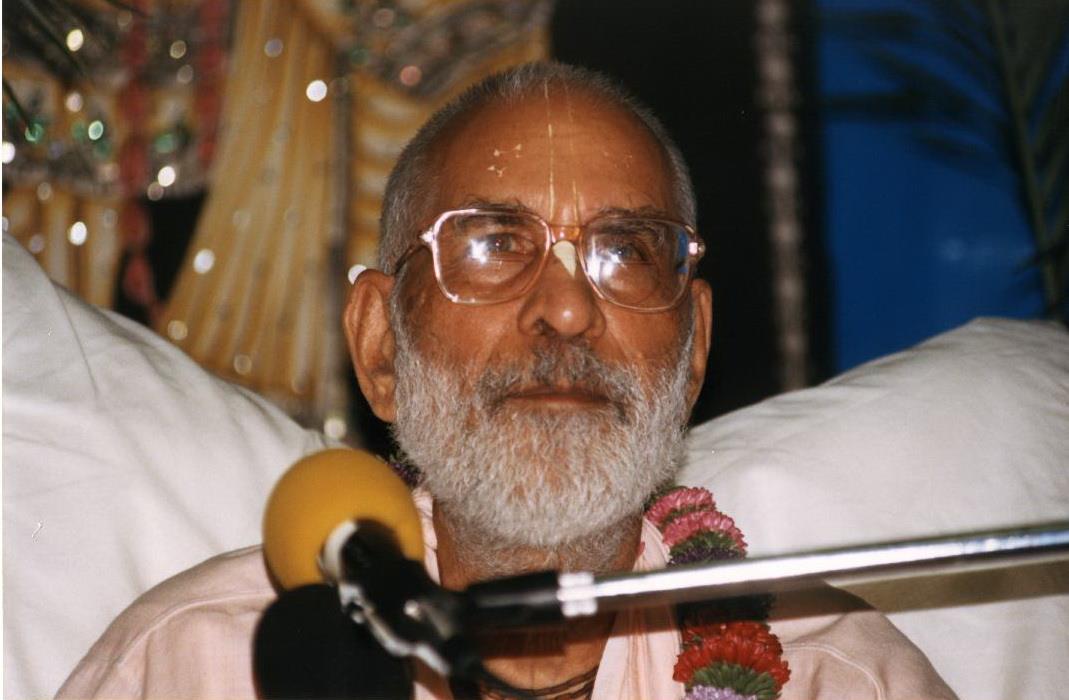 "All glories to nitya-lila-vilasini Sri Raman Manjari sakhi (nitya-sakhi), who is the sakhi of Sri Vinod Manjari and who is engaged in service of the divine couple Sri Sri Radha-Krishna."

Today is the most auspicious 100th appearance day or Vyasa-puja festival of our beloved Gurudeva, his divine grace nitya-lila pravista om visnupada asttotara sata Sri Srimad Bhaktivedanta Narayana Gosvami Maharaja. Just as we have to observe Sri Janmastami vrata, Sri Radhastami vrata, and Sri Ram-navami vrata in a grand way, in the same way we should celebrate the appearance and disappearance anniversary to serve Gurudeva.

Our guru-varga are the eternal associates of the divine couple and of Caitanya Mahaprabhu. Therefore, when and where their pastimes take place in one of the innumerable universes, sakhis and manjaris also appear with them. Hence their pastimes are eternally continuing in different brahmandas; there is no ending.

We have to assemble here at his lotus feet to offer puspanjali for his honour. It is the duty of each and every disciple to glorify his Gurudeva on his appearance day on the basis of his personal realization about his spiritual master. But at the same time every one must remember that following the instruction and order of one’s Gurudeva is the top priority after his entrance into unmanifest pastimes rather than merely offering flowers.

The Vedas originate from the Supreme Lord Krishna. Lord Krishna imparted this knowledge to Lord Brahma, the creator of this universe. Brahma instructed his son Narada Muni, who in turn gave this knowledge to Vyasdeva who compiled the Vedic knowledge and literatures: Puranas, Upapuranas, Upanishads, Mahabharata, Brahmasutra, etc. He spread this Vedic knowledge all over the world through his disciples. Not only this universe, but the devotees of other universes are also observing the grand celebration his Divine Grace’s 100th Vyasa-puja.

A bona fide Vaisnava spiritual master coming in this disciplic line is considered a representative of Srila Vyasdeva. Srila Gurudeva is the 33rd acarya in the disciplic succession and his disciples and innumerable followers observe his appearance day as Vyasa-puja.

His glorious sweetness is endless. His greatness is like the highest peak of the Himalayan mountain. His katha was laden with a sweet combination of the highest mood of Srimati Radharani and the deep, fathomless ocean of mellow of Lord Krishna—manifested in Vrndavana. He gives shelter to all those who come to him, and nourishes them by an unprecedented combination of loving reproach and affection. He is himself eternally immersed in the flow of vraja-rasa, inundates others with its waves and churning that flow to relish the manjari mood. He has all his life in this mood.

It an audacious attempt on my part to glorify him. I am just like a toad who, having never seen the ocean, is trying to explain how deep it is, what types of jewels are on its bedstead, what is the taste of the water, and so on. His qualities are uncountable; his glories are immeasurable. It may be possible to measure the ocean, to search the store house of the jewels, but it is entirely impossible to fathom the glories of his lotus feet. Only to purify myself and my heart, and to get his causeless mercy, I am writing this little offering of his glories, as one worships Ganga-devi and offers her water back into her.

Just as a piece of iron comes into contact with magnet, then this iron-piece manifests its magnetic qualities for some time, likewise when a great personality gives his sublime association to some tiny figure, then this ordinary personality displays its amazing symptoms.

One hundred years ago, on 7th February, 1921, on the Amavasya (new moon) day of the month of Magh, during the time of British rule, he appeared in Tiwaripur village, located near the bank of sacred Ganges River, Buxar district, Bihar state, India. His parents are Sri Baleswar Tiwari and Srimati Laksmi devi. They were initiated Vaisnavas of the Ramanuja sampradaya. Throughout his childhood period he regularly attended many, many programs of spiritual bhajan-kirtans and Ramayana and Bhagavat discourses with his father at his house as well as in his neighbouring villages.

When he was serving in the police department, he met with a Gaudiya Vaisnava devotee by the name of Sripad Narottamananda Brahmacari, a renowned disciple of Srila Bhaktisiddhanta Sarasvati Thakura Gosvami. For a few years he would, from time to time, hear from him about the Gaudiya philosophy, Sri Caitanya Mahaprabhu and His sankirtana movement and about the Divine Couple, Sri Sri Radha-Krsna. In 1946, during the Gauar-purnima festival, he gave up his job and family life and came to Navadvipa-dhama to join Sri Devananda Gaudiya Matha. He took Harinama and brahmana initiation from our Param-Gurudeva Sri Srimad Bhakti Prajnana Kesava Gosvami Maharaja in the same year. His name was Gaura Narayana Das Adhikari. Observing his service mood to all Vaisnavas and devotees, Param-Gurudeva awarded him with the title ‘’Bhakta-bandhava" (bosom friend of all categories of devotees).

The next five years, he stayed with his gurudeva and travelled all over Bengal and India. In 1952, he was initiated into the renounced order of life by his gurudeva and his name became Srimad Bhaktivedanta Narayana Maharaja. In 1954, he came to Mathura and took charge of our Sri Kesavaji Gaudiya Matha, a service he maintained till his last day. Gradually he started to spread message of Caitanya Mahaprabhu among the Hindi-speaking people and initiated the publishing of Gaudiya scriptures in the Hindi language. He became so much loved and admired by all the brajabasis. One of the greatest contributions of his life is that he started the Vraja-mandal parikrama during the month of Kartik from the Mathura matha. On his repeated insistence, Abhaya Carana Dey, a disciple of Bhaktisiddhanta Sarasvati Thakura, took the sannyasa order of life from Bhakti Prajnana Kesava Gosvami Maharaja in 1959 and his name became Srimad Bhaktivedanta Swami Maharaja. To fulfil the desire of his gurudeva he went to New York in 1965 and from there started to preach around the world.

Srila Gurudeva also started to preach over the whole world from 1996 till 2010. Thousands and thousands of fortunate souls became his disciples, devotees and admirers. It became a great phenomenon in the history of the spiritual world. The sensation of his harikatha used to make the audience mesmerized.

The main topic of his preaching was how to perform devotional service in the line of Srila Rupa Gosvami, to realize ‘’unnata-ujjvala-rasa’’, ‘’sva-bhakti-sriyam’’, ‘’bhava-ullasa-rati’’, ‘’tat-tat-bhava-icchamayee’’ or ‘’manjari-bhava’’. He used to speak, ‘’Swami Maharaja cleared the jungle and myself going there and preached about pure devotional service’’.

Sri Rupa Gosvami presented this ‘’tat-tat-bhava-icchamayi’’ in his immortal work Bhakti-rasamrita-sindhu, Ujjvala-nilamani and others. After that Srila Narottama Das Thakura wrote this ‘’Sri Rupa-manjari pada’’ kirtan where he hankers for getting manjari-seva unto the lotus feet of Sri Rupa Gosvami. In this disciplic-succession, Srila Visvanatha Cakravarti Thakura has established the supremacy of manjari-seva and paramour mood. Srila Bhaktivinoda Thakura made it more accessible. Srila Sarasvati Thakura Prabhupada also told, ‘’our only single one-pointed goal is to become the dust of lotus feet of Srila Rupa Gosvami’’.

In this track our param-gurudeva Srila Bhakti Prajnana Kesava Gosvami Maharaja established Sri Gaudiya Vedanta Samiti following the guidelines of Rupa Gosvami and he gave the title ‘Bhaktivedanta’ to his sannyasa disciples. By this fact it has been proved that Vedanta philosophy is not Mayavada philosophy, it is the asset of Gaudiya Vaisnavism. And Srimad Bhagavatam is the quintessence of Vedanta. And the essence of Srimad Bhagavatam is the 10th canto—and its essence is ‘’Rasa-pancadhyaya’’. And the most sublime topic of all scriptures is the ‘’rasa dance" pastime. Therefore, the Bhaktivedanta title is an indication of sringar-rasa. And the highest limit of conjugal loving affairs and sringar-rasa is ‘’sva-bhakti sriyam’’’ (own devotional mood or manjari mood.)

Following the Rupanuga conception (doctrine propagated by Srila Rupa Gosvami) our beloved gurupadapadma established Sri Rupa Sanatan Gaudiya Matha at Sevakunja gali in Vrndavana. One of the greatest poets in Vraja, Sriman Raskhan has mentioned that the Supreme Lord Krishna Himself has been massaging the lotus feet of Srimati Radha Thakurani.

Srila Rupa Gosvami, Srila Krsnadas Kaviraja Gosvami, Srila Visvanatha Cakravarti and other acaryas in our line have mentioned in their books these manjari bhava, unnata-ujjvala rasa, etc., and it was Srila Gurudeva who, for the very first time, openly bestowed these priceless, hidden treasures to the whole world.

Though we are celebrating his appearance day, feeling much joy in our mind and heart, at the same time, we feel deserted, very sad, and helpless due to his physical absence. Almighty Supreme Bhagavan, who is the possessor of all potency (saktiman) and His own eternal potency (sakti) is undivided, ‘’sakti-saktiman-matayor-abhedah’’; therefore, there is never any separation between them. But by the aghatan ghatan patiyasi lila sakti, or the pastime potency of the Lord that makes the impossible possible, the Lord creates an atmosphere of separation within eternal unification creating wonderful rasa-vaicitya. This is an indescribable stage of pema.

The first sprout of the desire tree of divine love is Srila Madhavendra Puri. In his perfected stage he is lamenting like Mathura-virahini Srimati Radha Thakurani:

After Sri Krishna went to Mathura, Srimati Radharani felt so much unbearable deep separation, and the flood of maha-prema appeared in Her heart. Under supervision of that mood if someone does bhajan (practising pure devotional service), that is the topmost procedure of bhajan. And in that verse, the mood of lamentation, of separation was envisaged by Sripad Madhavendra Puripad before Mahaprabhu came into this world.

Mahaprabhu is also lamenting in separation from namacarya Haridas Thakura after his disappearance.

"Alas! Alas! Without seeing my only life and soul, Radha Kunda appears as ferocious tiger, Giriraja Govardhana mountain seems to me as python, and the greatest grazing field Sri Vrndavana dhama appears as meaningless.

Having the mood and sentiment of Srimati Radha Thakurani, Sri Gaurcandra opened His heart also like this in His Siksastakam:

"O Govinda, in separation from You, torrents of tears flow from my eyes, one moment appears to be eons, and this entire world is completely void."

I conclude this offering with the words of our acaryas:

"Being merciful to me Krishna gave the transcendental association of Srila Gurudeva to me. But He is independent, by His desire I now become bereaved from his association."

On this auspicious day, I am praying unto lotus feet of guru-padapadma, please bestow your causeless mercy upon me, so that I can follow your instructions as it is and can serve your worshipable deity Sri Sri Gaura-Radha-Vinoda-biharijiu and one day can become worthy to attain manjari-bhava and enter into your pastimes to serve you.