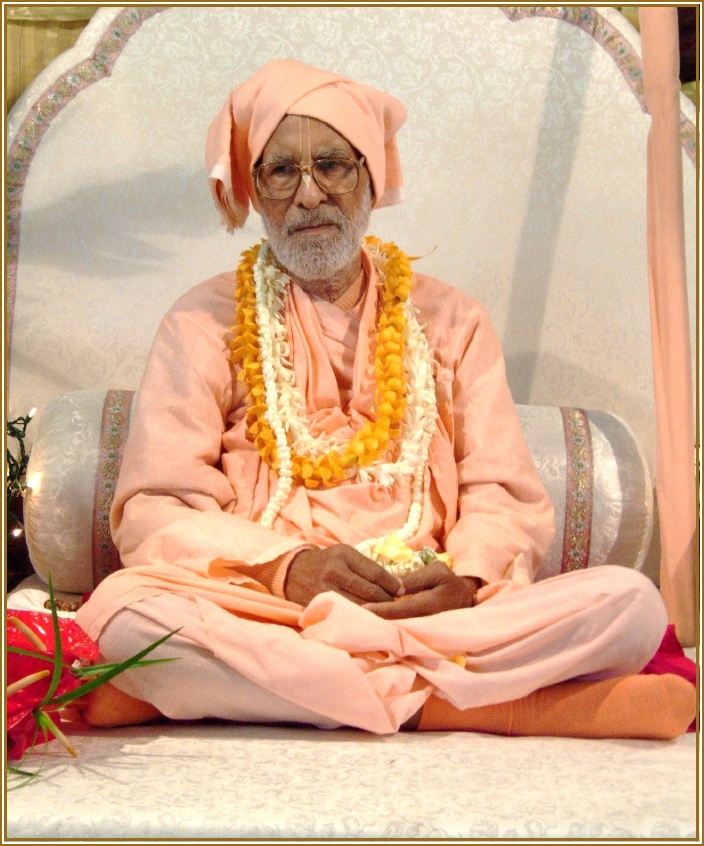 The glories of my sanñyāsa and śikṣa guru, oṁ viṣṇupāda aṣtottara-śata Śrī Śrīmad Bhaktivedānta Nārāyaṇa Gosvāmī Mahārāja, are boundless and without end. `yato vāco nivarttante aprāpya manasā saha' - That, from which the mind and speech return, having been unable to attain it.

Śrīla Gurudeva was born in 1921 in the Buxar district of Bihar province, in the village of Tivāripur on the new moon day of Maunī Amāvasyā in the month of Māgh (December -January). In 1946 he left everything and and fully surrendered at the feet of his most worshippable Śrīla Gurudeva, Śrī Śrīmad Bhaktiprajñāna Keśava Gosvāmī Mahārāja Jī, and under his instruction and direction fully absorbed himself in affectionate service of Śrī Guru, vaiṣṇava and Bhagavān.

Thus, for an extensive period of time, both together with his Gurudeva, Śrīla Bhaktiprajñāna Keśava Gosvāmī Mahārāja Jī, and with his own devotees, he preached pure devotion (viśuddha-bhakti) throughout every corner of India, and thus inspired countless souls to engage in devotion to the Supreme Lord (śrī bhagavat-bhakti), the very essence of the ultimate auspiciouness for all living beings. Thereafter, from 1993 until 2010, he travelled repeatedly to almost every place, such as; America, England, Australia, Holland, China and Nepal, and there he bathed the burning suffering souls of Kali-yuga and slaked their thirst with the flowing Ganges of pure devotion, and having bestowed upon them this supreme coolness and superlative good fortune, he showed them extreme compassion by granting them the service of Śrī Rādhā-Ramāṇa-Vihārī Jū and Śrī Rādhā-Vinoda-Vihārī Jū. Śrīla Gurudeva bestowed a great gift upon the world through his teachings and writings, and by publishing countless hitherto difficult to attain rare literatures. Thus he will be remembered for aeons to come.

On 29th of December 2010, In Śrī Jagannāth Purī, the place where Śrīman Mahāprabhu manifested His mood of divine love in separation, Śrīla Gurudeva was remembering Śrī Kṛṣṇa playing the flute on the bank of the river Kālindī. Even though Śrī Kṛṣṇa is absorbed in artfully and intimately exchanging with a multitude of beaming lotus-faced milk-maidens, He still expresses a greater love for Śrīmatī Rādhikā. Thus, completely sunken within the moods of this same Śrīmatī Rādhikā, Śrīla Gurudeva entered into the transcendental realm. He entered the eternal pastimes.

Śikṣā-guru is the personified container and shelter of bhakti (āśraya-vigraha) and indeed the embodiment of the process to attain it (abhidheya-vigraha). The supreme energy, bhakti, having the qualities of the essence of Bhagavān (bhagavat-svarūpbhūtā mahāśakti bhakti), is the sole process for the ultimate attainment (abhidheya). Therefore, śikṣā-guru is non-different to dīkṣā-guru, the bestower of the knowledge of our divine relationship. My most worshippable dīkṣā-gurudeva, who bestowed upon me the knowledge of my relationhip with Bhagavān, oṁ viṣṇupāda aṣtottara-śata Śrī Śrīmad Bhaktijīvana Janārdana Gosvāmī Mahārāja Jī and my most worshippable śikṣā-gurudeva, oṁ viṣṇupāda aṣtottara-śata Śrī Śrīmad Bhaktivedānta Nārāyaṇa Gosvāmī Mahārāja, shared an extrememly close and intimate relationhip, and would almost always be exchanging the moods of Śrīmatī Rādhikā between one another. Amongst all the disciples of Śrīla Prabhupāda, the mood of being a follower of Śrīmatī Rādhikā was very clearly manifest in my dīkṣā-gurudeva, and he had at some time given the direction to my śikṣā-gurudeva to keep this specific mood of absolutely resplendent and intimate deep natural affection and attachment for Śrī Kṛṣṇa (bhāvollāsa-rati) alive. In reponse to this guidance, Śrīla Gurudeva infused these moods into the hearts of others.

When my most worshippable śikṣā-gurudeva, oṁ viṣṇupāda aṣtottara-śata Śrī Śrīmad Bhaktivedānta Nārāyaṇa Gosvāmī Mahārāja Jī travelled to preach, he saw that almost everywhere, all are engaged in the worship of Nitaī-Gauracandra, and that people are somewhat hesitant to engage in the direct devotional service of Śrī Rādhā-Mādhava, the Divine Couple in eternally budding-youth. Then he said:

Only those who completely drown in the waves of the prema-rasa ocean of Śacinandana Gaurahari will most certainly enter into the confidential pastimes of Śrī Rādhā-Mādhava.

Only upon receiving the compassion of Śrīman Nityānanda Prabhu can one attain the service of Śrī Rādhā-mādhava in Braja. Therefore take shelter of His two lotus feet!

Śrīla Gurudeva said that for a person who is richly endowed in pious spiritual merit, the nectar-ocean of divine love that issues from Śrīmatī Rādhikā's lotus feet will become manifest in their heart to the same degree that they perform devotional service to the lotus feet of Śrī Gaurasundara. In this way so many memories of Śrīla Gurudeva are etched on the mantel of my heart.

At the time when Śrīla Gurudeva would give class on Śrīmad-bhāgavatam, Śrī Caitanya-caritāmṛta, Jaiva-dharma, other literatures and particularly the Rasāyana class within Śrī Bṛhad-bhāgavatāmṛtam, and the Rāsa-pañcādhyāyī (the five sections on the deepest internal mellows of the most intimate exchanges - Praṇaya-gīta, Gopī-gīta, Yugala-gīta, and Bhrama-gīta etc.) which are the very heart and life-airs of the Śrīmad Bhāgavatam, his each and every sentence, word, sound, and expression of mood would touch the heart in such a way that one would lose all consciouness of one's body, home and material designation. In the very same way:

When Śrī Kṛṣṇa disappeared from the rāsa-līlā, the condition of the gopīs was such, on account of their having become completely śrī-kṛṣṇamayī, pervaded with Śrī Kṛṣṇa to the very core. Their speech was exclusively the words Śrī Kṛṣṇa. Their bodily movements portrayed nothing but the entire repertoire of His activities, their each and every pore to their very soul was completely surcharged with Śrī Kṛṣṇa through and through. They sung of nothing but His pastimes and qualities, and became so absorbed therein, that there remained no consciouness or understanding of their own body at all, so how could they think of their homes and families? In fact, their absorbtion in Śrī Kṛṣṇa was so deep that they became oblivious to absolutely everything else. Thus, Śrīla Gurudeva engaged everyone in such a way that both the listeners and the speaker were made to forget everything but Śrī Kṛṣṇa. A speciality of Śrīla Gurudeva's kathā was that whenever he spoke he would always support the side of Śrīmatī Rādhikā.

I offer my humble heart-felt prayers at the lotus feet of my most worshippable śikṣā and sanñyāsa gurudeva, oṁ viṣṇupāda aṣtottara-śata Śrī Śrīmad Bhaktivedānta Nārāyaṇa Gosvāmī Mahārāja Jī. He resides eternally in Vṛndāvana. He is decorated with unlimited virtues, and personifies the motherly affection of millions of doting mothers. (1)

When singing the myriad glories of his own Śrī Gurudeva, Śrī Śrīmad Bhaktiprajñāna Keśava Gosvāmī Mahārāja Jī, he becomes exquisitely resplendent with many transcendental bhāvas, such as profuse weeping and horripilation, his eyes brimming with blissful delight. The transcendental body of of my Śrīla Gurudeva, Śrī Śrīmad Bhaktivedānta Nārāyaṇa Gosvāmī Mahārāja Jī was always imbued with this cornucopia of supramundane emotions. (2)

He was always in allegiance with Śrīmatī Rādhārānī, and excessively jubilant, elated, and jocund when triumphant over Kṛṣṇa's party just as over any rival party. I offer my obeisances time and again to such a gurudeva as this.

When glorifiying Śrīmatī Rādhārānī's plenitude of virtues his mind would be utterly lost deep in bhāva. Whilst each and every moment relishing transcendental mellows, he constantly experienced ecstatic joy in his soul. (4)

Whilst acting under his guidance, my Śrīla Gurudeva is enlivened in the self-same moods as Śrīla Rūpa Gosvāmī Jī, the inculcator of Śrī Caitanya Mahāprabhu's deepest heart-felt desires; and he preaches the conduct and conception that was etablished by the emminent Śrīla Rūpa Govāmī. (5)

He manifested the literatures of the Gauḍīyā tradition in every language accross the globe. He is the embodiment of munificence in his distribution of the `bhakti-śrī' of Śrīman Mahāprabhu, the most elevated of brilliantly radiant confidential ecstatic devotional moods of Śrīmatī Rādhikā and Her intimate maidservants. (6)

He is renowned throughout Braja-maṇḍala, and very dear to the Brajavāsīs. I offer prayers to my Śrīla Gurudeva who is the foremost spiritual teacher for the age of Kali, `Yugācārya' and the sublime quintessence of Braja.(7)

O you who art dear to Śrī Rādhikā! O you who serve under the auspice of Lalitā's coterie! O Śrīla Gurudeva! May your fame and glories be celebrated everywhere! (8)

Repeatedly I pray, with anxious heart, that for ever and for always my mind be firmly attached to your lotus feet. (9)