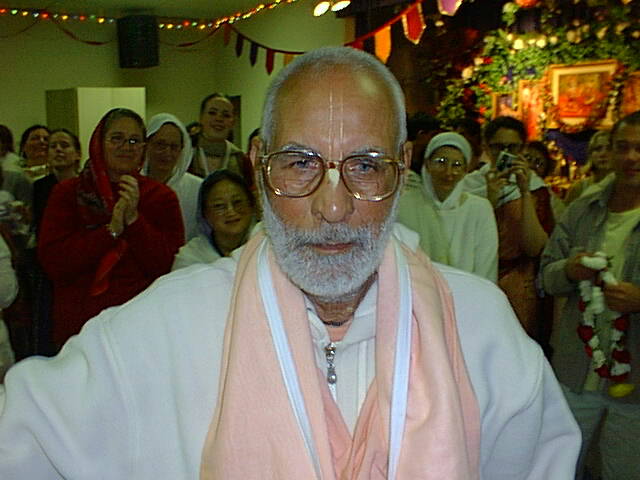 I offer my millions of dandvat pranams unto the lotus feet of param Gurudeva, Srila Bhaktivedanta Narayan Gosvami Maharaja.

I met Srila Gurudeva not a long time ago. I remember the first time I saw a picture of him in the vyasa asana, the moment I walked into my first Gaudiya Math temple in Rio de Janeiro, in December 2017. I didn't know then that he would change my life forever. Since then I had the very great fortune to be taken care of by his disciples. I was introduced to his uncomparable vani that really was the "game changer" aspect that made me leave my family, job, and studies to go to Vrndavana. Not much time after I moved to India, I had an even greater good fortune to join the Audio Seva Team and the Centennial 2021 team. Before that, I knew Srila Gurudeva and what he had done for us, but I didn't have much of a relationship with him. Luckily, I joined the seva to help with the videos and I was granted an external HD with all the recorded videos of Srila Gurudeva since 1989.

Looking back now, I can say that this alone saved my life. I had no idea that I would encounter so many obstacles in my path that would make me wanna give up on everything, and watching these videos, as I edited them, was everything I needed and more. I would spend hours and hours watching Srila Gurudeva speaking to the devotees around the world, from when I was not even born, and still I would feel like I was there with them.

I saw so many familiar faces from his dear disciples in the audiences, who are already in Krsna consciousness, while I am still stuck in my past life. Watching these videos really made me feel so close to Srila Gurudeva, like I actually met him in person, and this is so special to me. Now I know how he moves, I know the way he speaks and gesticulates, his expressions, it's like I met him in person. I feel so extremely fortunate for being able to have access to all of this. This external HD is literally the most valuable item I have in my life, because it gave some sense of relationship between me and Srila Gurudeva, even though I know I'm so far from actually having had one. I bow down to all the devotees that could see physically, what I see through a screen.

I owe everything in my life to Srila Gurudeva. Every moment I lived in ignorance for 20 years were meant for the moment I saw his picture back in 2017. If it wasn't for him, I would have had nothing to aspire for and I wouldn't be here anymore as I would have definetely given up by now. I bow down millions and millions of times to the lotus feet of Srila Gurudeva and I beg him to always keep me engaged into his service for all the lives I will still have to live. This is what keeps me alive, and even though I know I can't repay him, I want to try till eternity to serve him.