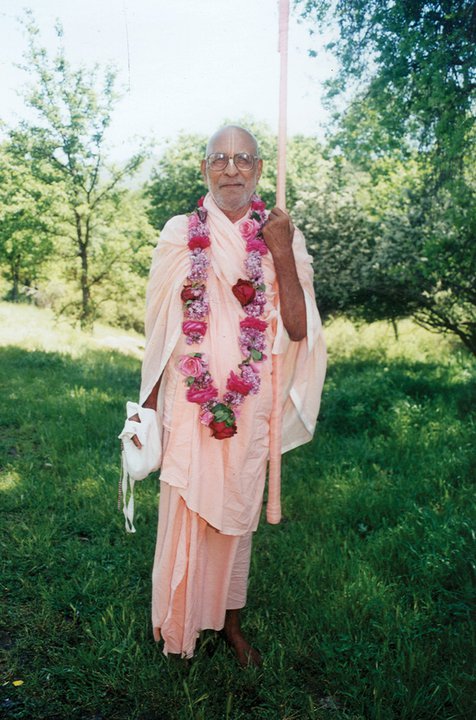 Please accept my unlimited dandavat pranams at your lotus feet on this 100th anniversary of your blessed appearance in this world. All glories to Sri Sri Guru and Gauranga.

On the rooftop in Mathura, you once told a group of Western devotees that we should not remain with a superficial view of our acaryas. We should not be content to delight in the way they walked, or the way they drank water from a glass. Rather, we should understand their respective specialities.

My Guru Maharaja breast-fed us with the basics of human behaviour, spirituality and regulated devotional service. He stated clearly that the goal is spontaneous bhakti, but he did not go into details that we could not at that time digest and assimilate. However, he gave us enough information to identify authentic teachers who would help us with our next steps when the time came. In his early purport to Srimad Bhagavatam 1.5.24 he referred to “the bhakti-vedantas” in the plural. At that time, the only Bhaktivedantas were himself and the sannyasa disciples of your Guru Maharaja. Just before his departure from this world, he called you and tasked you with taking care of his disciples and training us further.

I regard you as his true successor, because you have succeeded in enhancing his success, by representing him beautifully, and giving us what he would like to have given us. You helped me to realise at the very beginning of our relationship that, although you and he are your own distinct personalities, you are also non-different from each other. Guru is one, and this is an unfathomable mystery.

Your beloved Srila Visvanatha Cakravarti has glorified the spiritual master as being haritva, the personified qualities of Hari. The most important quality of Hari is his mercy to the fallen conditioned souls. My Guru Maharaja certainly personified this quality by giving Krishna consciousness to those who were living like animals. You also did this in your own way, by offering to re-constituted animals such as myself a glimpse of the sublime secrets and sacred mysteries of spontaneous vraja-bhakti.

You are also haritva in another way. Nikunjayunoh rati-keli siddhyai: you perfect the confidential, loving pastimes of the Divine Couple. By so doing, you help Sri Krishna to realise His own qualities (haritva), and to fulfill the purpose of His being, knowing and loving (sac-cid-ananda).

There is more. In those loving pastimes, Srimati Radhika steals Krishna’s heart, bewilders Him completely, and gives Him Her full shelter (lalal-lulan-milan-manojna-mugdha-mohanasrite). Hari is one who steals, and Sri Krishna is the supreme thief. He steals his devotees’ sinful reactions, their hearts and their butter. But that supreme thief is Himself stolen away by your beloved Svamini, Srimati Radhika, who is the supremely adept thief of thieves. So haritva also means that you, as Her manjari maidservant, are the personification, not only of His qualities, but of Her qualities as well.

Your haritva is the personification of the loving pastimes (ramana) of the Divine Couple. Hence, one of your specialities is the glorification of those delightful pastimes, and no one could put their hand over your lotus mouth, although many wanted to and tried. How could they possibly suppress your innate, transcendental nature? You emphasised the importance of the name Radha-Ramana, and you glorified the kirtan Radha-Ramana-Hari Govinda jaya jaya, in which you are situated between Radha and Her Hari.

You pointed to three verses from Sri Vilapa-kusumanjali as “the articles of sakhi-bhava”: 96, 16 and 72. These three verses describe respectively (1) the aspiration to be situated at the tips of Srimati Radhika’s lotus feet; (2) the avowal that service to Her lotus feet is far superior to being her sakhi (beloved girl-friend); and (3) confidential nikunja-seva to Her lotus feet, under the direction of Sri Rupa Manjari. Sri Radha’s lotus feet are your actual property. Therefore, when Srila Vishvanatha Cakravarti Thakura offers prayers to guroh (of Guru) sri caranaravinda (the lotus feet), he is also offering obeisances to Srimati Radhika’s lotus feet (sri caranaravinda), which are the property of Guru (guroh).

You have pointed out that when Sri Krishna is described as atmarama (delighting in Himself), the Self in whom He is delighting is Srimati Radhika. Krishna has Himself proclaimed acaryam mam vijaniyam: “You should know the acarya to be Myself.” You are the non-different servant of Sri Krishna’s very Self.

In pointing out some of your divine attributes, I am like a dwarf jumping to catch the moon. How can a single photon, the smallest particle of sunlight, understand the sun? But I think that you are smiling at my childish antics. You are one of the line of acaryas who follow Lord Caitanya in each and every universe. How could such an unimaginably unlimited personality as yourself appear in a medium-sized form and befriend in the most sublime way a fallen atomic jiva such as myself? It is not possible, and I offer my obeisances to that impossibility that has come true. You are Krishna’s energy that makes the impossible possible.

You appeared in my life without any invitation, resolved my tiny crises, and made my life successful at last by engaging me in editing and then in travelling as your representative. You also engaged me in singing with the violin for you for all those days and all those years. You accepted me as your own, and gave me the sannyasa order, in spite of my disqualifications. You also gave me the name Nemi, for reasons that you did not disclose. I know you want me to plunge into your bhajan-seva, but I had already given my heart to my Guru Maharaja’s First Purpose mission for peace and unity in the world. As Ramachandra pointed out when Bharata wanted him to come back to Ayodhya, “I promised Father, and he is gone. He cannot change the instruction now.” This apparent conflict is a deep pain in my heart. Still, I try to represent you and your divine mission as best I can. I can only catch hold of your lotus feet and pray with full confidence that you will accept me as yours, as I am, as I accept you as mine, as you are, to whatever extent I can realise.

I beg to remain your loving servant eternally, both here and in the spiritual world,