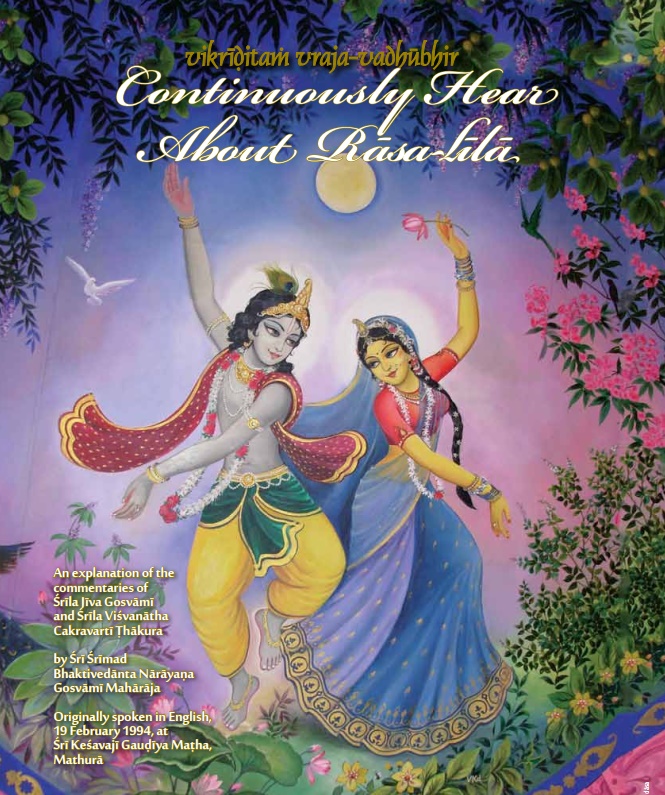 A sober person who, with full faith, continuously hears or describes Bhagavān Śrī Kṛṣṇa’s transcendental rāsa-līlā with the damsels of Vraja will first attain parā-bhakti for the lotus feet of Bhagavān. Thereafter, he will quickly conquer his senses and become forever free from the disease of the heart – worldly lust.

The word anumodana means appreciation. Even if someone cannot engage in continuous śravaṇa, kīrtana and smaraṇa (auditory reception, vocal explication and mental recollection) of rāsa-līla, yet still feels appreciation for it, then he, too, will receive prema-bhakti, the topmost bhakti, for Śrī Kṛṣṇa, within the core of his heart. First prema-bhakti, the most elevated form of devotional service (parā-bhakti), will enter his heart and then, afterward, hṛd-rogam āśv apahinoti – the disease of the heart will be driven out very quickly.

The term hṛd-roga, or “disease of the heart”, primarily indicates lust, or kāma. It also means attraction to any illusory entity (mayika-vastu), including mundane adoration, name and fame, and every other attractive feature of this world. A man’s love for his dog, for a girl, for his father, mother, wife or anyone else, is included in the term hṛd-roga. All forms of attraction to anything in this world – the attainment of residence in the heavenly sphere, sense enjoyment and so on – are included in the term hṛd-roga. But hṛd-roga especially refers to lust, or kāma.

So, at first, prema-bhakti, the topmost form of devotional service (parā-bhakti), will enter a person’s heart, and then, after that, he will forever be jitendriya, the conqueror of his senses. All forms of mundane attraction will permanently go far away and he will happily and continuously engage in śravaṇa, kīrtana and smaraṇa of Śrī Kṛṣṇa’s rāsa-līla. Then, at last, he will attain residence in the abode of that topmost bhakti, Goloka Vṛndāvana. 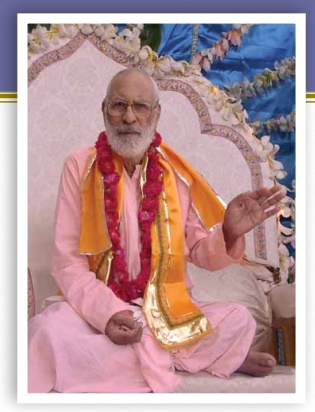 Śrī Kṛṣṇa is līlā-puruṣottama, the supreme personality of all līlā, and the gopīs are līlā-puruṣottamā. The meaning of puruṣottamā is līlā parā śakti, the supreme potency of all līlā. And the rāsa-līlā between Kṛṣṇa and the gopīs is the best of all līlās, in which every other līlā may arise. For example, dola-līlā, wherein Śrī Kṛṣṇa plays with the gopīs on beautiful swings, has so many special features of its own. In this līlā, Śrī Kṛṣṇa wants to embrace the gopīs, but they are too shy to embrace Him in front of each other. However, when the swing they are seated upon is pushed higher and higher, the gopīs become afraid and tightly embrace Him. All the special features of this pastime and all the features of hundreds of thousands of other līlās are included within rāsa-līlā.

If someone longs to hear about these pastimes, his longing is also to be known as cakravartī. By continuously hearing Śrī Kṛṣṇa’s rāsa-līlā, he will become qualified to explain it. And by continuously explaining it and hearing about it, rāsa-līlā will automatically appear in his heart, without any tiresome endeavour. Such proof of the efficacy of this process is the cakravartī of all proof.

Śrīla Viśvanātha Cakravartī Ṭhākura further clarifies that by hearing about this rāsa-līlā and by explaining it; by remembering it and even by anumodana, appreciating it, a man will obtain gopī-prema. First he will enter rāgānuga-bhakti[1] in gopī-bhāva, then he will achieve svarūpa-siddhi[2] in that same bhāva and at last vāstu-siddhi[3]. And in gopī-bhāva he will directly join in that same rāsa-līlā with Śrī Kṛṣṇa and the gopīs. This is certain. Śrīla Viśvanātha Cakravartī Ṭhākura has stressed this point by using the affix nu – surely.

If a person never hears rāsa-līlā kathā, his birth is useless. He should die, for he is actually a nāma-aparādhī and a vaiṣṇava-aparādhī. This is a very strong statement, and although it is beneficial for all to hear it, not all are qualified. Previously, when we were in Jagannātha Purī during the month of Puruṣottama, I expressed the same truth Śrīla Viśvanātha Cakravartī Ṭhākura is explaining here. It is essential to hear all of these truths, for one who fails to understand them is bound to become a nāma-aparādhī.

What blessings has he given? With the words

Śrīla Śukadeva has blessed all those who hear, speak, remember, and appreciate this kathā to surely attain that parā bhakti. The term parā-bhakti, or the topmost bhakti, refers to prema-bhakti. But which form of prema-bhakti? Vātsalya-prema? Sakhya-prema? No. They will surely attain mādhurya-bhāva. They will become gopīs, just as the personified Śrutis did. But while the personified Śrutis took a very, very long time to attain the positions of gopīs, those who receive Śrīla Śukadeva’s blessings will attain mādhurya-bhāva in a very short time.

If you hear about, explain, remember and appreciate these pastimes then you will obtain the darśana and blessings of Śrīla Śukadeva Gosvāmī, as well as Śrī Jīva Gosvāmī and Śrīla Viśvanātha Cakravartī Ṭhākura.

In his commentary, Śrīla Jīva Gosvāmī quotes a verse from Gītā:

A person thus situated in transcendence becomes fully joyful. He never laments or desires anything. Being equally disposed to all beings, he attains bhakti to Me, which is blessed with the symptoms of prema.

Those who are brahma-bhūtaḥ constantly remember brahma, brahma, brahma. They are no longer in the grips of māyā, which primarily refers to mundane lust. All their desires have been removed and all their anarthas have disappeared. Such personalities do not desire anything. Brahma-bhūtaḥ prasannātmā. They are always prasanna, or pleased, since they are ātmā-rāma (one who rejoices in the self) and do not crave anything in the entire world. And they never experience any regret or sorrow. If they lose something, they never hanker (kāṅkṣati) for it.

Then, sarveṣu bhūteṣu, they are equal to all. At that stage, mad-bhaktiṁ labhate parā, they may attain parā bhakti for Śrī Kṛṣṇa. Here, one’s progress toward the attainment of parā-bhakti is the opposite of what we have previously discussed, for it is in relation to brahma-jñānīs. This verse describes that such brahma-jñānīs will first have to conquer lust and all of their anarthas. They will have to give up all their desires, which will take a long, long time. Only then will they attain parā bhakti, as Śrīla Śukadeva Gosvāmī or Sanaka, Sananda, Sanātana and Sanat-kumāra did. And by this method, even if one attains prema-bhakti, it will only develop to the point of śānta-rasa.

But in the verse beginning vikrīditaṁ, we find that first parā-bhakti enters the heart and then lust and all other anarthas will automatically disappear. Those who follow the process that is described in the verse beginning brahma-bhūta prasannātmā will have to labour so much to become free from lust and all other anarthas. And they may not succeed. Among hundreds of thousands of brahma-jñānīs, perhaps one will succeed. There is no guarantee. But through the process described in the verse beginning vikrīditaṁ, anyone with śraddhā is qualified, and they do not have to make any laborious endeavour. They must simply hear, anuśṛṇūyād, and the topmost prema-bhakti, gopī-prema, will enter their heart, what to speak of śānta-rasa. This gives us great hope.

Why has the name Viṣṇu, the all-pervasive one, been used in idaṁ ca viṣṇoḥ? During rāsa-līlā, Śrī Kṛṣṇa has manifested Himself beside hundreds of thousands of gopīs, expanding one form for each of them. Viṣṇu, in this context, refers to that Kṛṣṇa, that Viṣṇu, not the Viṣṇu who resides within each atom of the material creation.

The word śraddhā means immovable trust that by engaging in kṛṣṇa-bhakti one will undoubtedly fulfil all of one’s duties, on every level.

In this context, śraddhā refers to the conviction that if one continuously hears rāsa-līlā, continuously explains it, and continuously remembers it and appreciates it, then he will attain gopī-prema and eventually attain the position of a gopī. The words sudṛḍha niścaya indicate the immovable determination that “surely it will come to pass”. If one is imbued with this kind of conviction then he is śraddhā-anvitaḥ.

In relation to a man who possesses such śraddhā, the word nu has been used which means “certainly”. In other words, those who possess this kind of śraddhā will certainly attain gopī-prema and enter into rāsa-līlā with Śrī Kṛṣṇa and the gopīs; of this there is no doubt. Also it is explained that if someone has faith in his gurudeva and faith in śāstra then his conviction shall be called śraddhā. This is the verdict of śāstra, of Śrīmad-Bhāgavatam, of Śrīla Śukadeva Gosvāmī.

If someone is deeply convinced that “surely it will come to pass” and hears rāsa-līlā kathā with such conviction, then he is qualified to hear it and will certainly attain prema-bhakti. He will attain a form of prema in accordance with what the gopīs experience in relation to Śrī Kṛṣṇa. First he will attain kṛṣṇa-prema –

bhaktiṁ parāṁ bhagavati pratilabhya – and then the disease of the heart, which includes all forms of mundane attraction, especially lust for the opposite sex, will go far away.

Lastly, Śrīla Viśvanātha Cakravartī Ṭhākura says dhīraḥ. One who is dhīraḥ is also described as a paṇḍita, a deeply realized person, or as munivara, the best of saints. Who is being referred to as dhīra in this verse? Those who proclaim, “In śastra it has been written that we should hear hari-kathā, and specifically the apex of all hari-kathā. By such hearing, the disease of lust will go far away.” One who believes in this fact very firmly is called dhīra – a deeply realized, saintly personality.

On the other hand, those who hear this śloka, and other ślokas in this line, but do not believe in them, are not qualified and the disease of lust will not leave their hearts. They proclaim, “First give up lust and only then can you hear all these topics. First become qualified and then hear about rāsa-līlā.” Śrīla Viśvanātha Cakravartī Ṭhākura has referred to such people as nāstika (atheists) and nāma-aparādhīs (offenders of the holy name). He explains:

Those who have no faith in the precepts of śāstra cannot attain prema because they are nāma-aparādhī. But if someone has even a trace of śraddhā, if he hears rāsa-līlā kathā he will attain full-blown śraddhā and thus become truly qualified to hear. Even for him, prema will first enter his heart, and then lust will go, completely and permanently.

Śrīla Jīva Gosvāmī concludes his commentary on this verse by saying, “He Prabhu! He Śrī Caitanya Mahāprabhu, it is You who gave this idea to the world. It is You making me dance inside and outside, inspiring me to explain all of this and to realize those explanations. You are making a person like me, a mundane fool like me, dance internally and externally. Because of the impetus of love for that Caitanya Mahāprabhu, I am writing all of these things.”

Śrīla Viśvanātha Cakravartī Ṭhākura has concluded his own commentary in a similar manner.

[1] Devotional service following in the footsteps of an eternal associate in Vraja is called rägänuga-bhakti.

[2] The perfection of realizing the inherent form of one’s own soul is called svarüpa-siddhi.

[3] The attainment of one’s eternal, fully spiritual body, which is completely untouched by the material energy, is called vastu-siddhi.