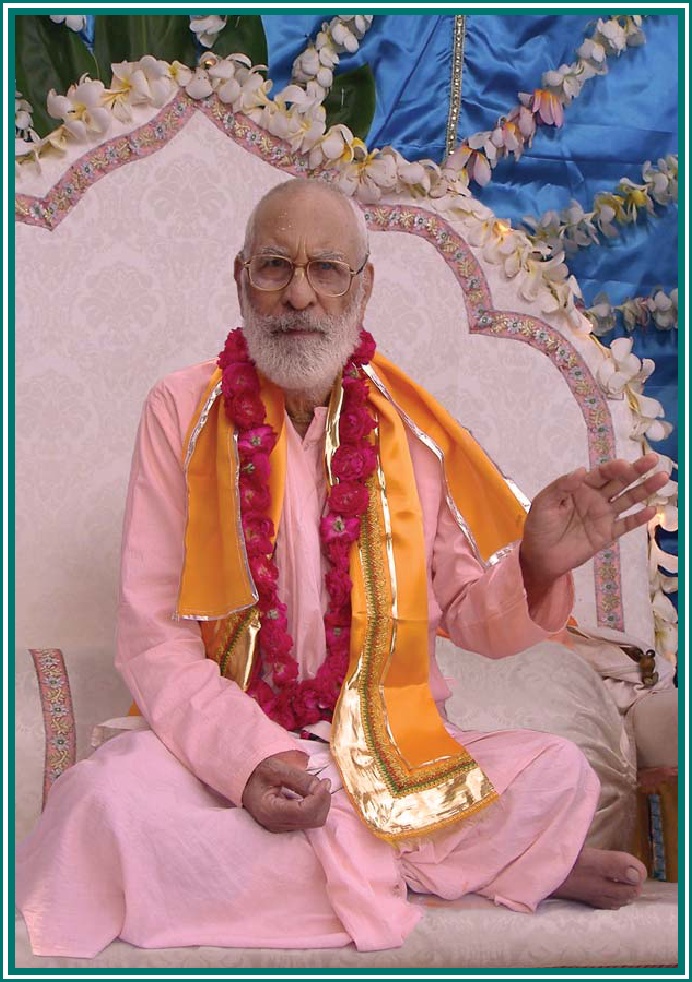 I am offering my puspanjali to Srila Gurudeva for his centennial vyasa-puja. Though I have no qualification at all, I am writing this on the basis of the views of senior vaisnavas and my own experience of listening to Srila Gurudeva's wonderful harikatha. I am highly fortunate to seek the shelter at the lotus feet of Srila Gurudeva. Although I never met Srila Gurudeva in person, I strongly feel a hearty connection with him through his nectarean harikatha.

I got connected with Srila Gurudeva through Brisbane Bhakti Sanga and I am very grateful to Sri Prakash Prabhu and Sri Acintya Gaura Prabhu & family for the same. When I started visiting Bhakti Brisbane Sanga, I saw a big photo of Srila Gurudeva, I had a feeling of some sort of connection and I got attracted towards Srila Gurudeva. I experienced real and pure spirituality there. I had the good fortune to hear about Srila Gurudeva's glorification from his disciples and Vaisnavas regularly.

In March 2018, I was highly fortunate to participate in Srila Gurudeva's Audio-Seva and this was a milestone for me. From the moment I started listening to Srila Gurudeva’s harikatha, I had a tremendous experience that Srila Gurudeva by his harikatha so strongly and forcefully pulling me out of this material life. After that, I do not know what happened to me and I got completely captured by him. I was highly inspired by his sweet harikatha and could not stop myself. I kept going on & on listening to his wonderful harikatha. It was all his mercy and I was highly benefited by this. I am eternally indebted to him. As I mentioned earlier, I never met Srila Gurudeva in person But, I feel a deep connection with him through his harikatha, teachings and instructions.

I would like to share my another experience here as Srila Gurudeva's explanation of the pastime places of vraja-mandala parikrama is so astonishing and lively that while I was listening to it, I experienced that as if I were in that parikrama and seeing all those beautiful places.

I always think about Srila Gurudeva that how it is possible to give such a large number of high-class lectures and to publish so many books? The answer is as he was not an ordinary person and that he came from the spiritual world to fulfil his mission.

I believe that it is not possible to express Srila Gurudeva's glories fully as words are limited and He was such a great maha-bhagavata and the top-most rasika-vaisnava, his glories are unlimited. He was giving topmost, very sweet, full of madhurya & rasamayi harikatha. I feel after listening to his harikatha, there is no need to listen to anything else. He gave us the topmost goal and the knowledge to achieve it. He tirelessly travelled around the world for so many times to distribute this supreme knowledge and bestowed his mercy upon all jivas. Due to his contribution the whole world will be eternally indebted to him.

He thoroughly explained all the topics, tattva- siddhanta in his discourse. I would like to mention few points of his very important teachings that He always stressed upon in his lectures, such as stay away from vaisnava-aparadha, to always be in association of high-class rasika-vaisnavas, greed for bhava and greed in bhakti, never criticize anyone, and by mind always be in Vrndavana.

Srila Gurudeva very beautifully described about Sri Radha-Krishna's pastimes, Sri Caitanya Mahaprabhu and his mission. He glorified all gosvamis, acaryas, vaisnavas and explained their moods and commentaries very nicely. I believe that Srila Gurudeva mainly focused upon propagating 'vraja-bhava' and 'raganuga-bhakti'. He revealed the topmost confidential topics about the gopis and Sri Radha without any reservations. With regard to his specialty, Srila Gurudeva highlighted 'manjari-bhava' and established “radha-dasyam” as our supreme goal.

I feel highly privileged to be in this Gaudiya Vaisnava parampara by the mercy of Srila Gurudeva. All our sannyasis, speakers and followers of Srila Gurudeva are giving the foremost harikatha. It is all due to his contribution. Srila Gurudeva gave his training, inspiration and mercy to all of his followers.

In conclusion, I truly believe that Srila Gurudeva has given us supremely topmost things in the path of bhakti and there is nothing beyond this point to achieve. He is our real eternal master and guardian.

I pray to Srila Gurudeva that he always keeps me at his lotus feet and under his guidance.

Aspiring for the mercy of Srila Gurudeva,