What to Reflect Upon in Times of Separation

On this 23rd day of the month of Agrahāyaṇa (Friday, 9th December 1949) falls the disappearance day of Śrīla Prabhupāda. It is essential to understand what a disciple must do on the disappearance day of his beloved spiritual master. We should all certainly perform whatever ritualistic ceremonies are recommended for this occasion, and perform them, as far as possible, according to Vaiṣṇava practices. But rather than consider this any further, I request everyone to remember the mano’bhiṣṭa, or most cherished desire, of Śrīla Prabhupāda. This unfortunate soul is presenting, in the form of a grief-stricken humble offering, only a few aspects of what awakens fully in his heart as he recalls the disappearance of his spiritual master.

Consolation is usually necessary at times of separation. Upon receiving it, the heart afflicted by the grief of separation finds relief. Without such solace, the affliction brings a person closer to the tenth stage of life - unconsciousness or death. One will feel separation from the lotus feet of śrī guru to the extent that one is attached to them.

Śrīla Prabhupāda’s Act of Depriving Us

Śrīla Gurupāda-padma has mercifully withheld bhakti from those of us who were proud of our learning, and to ensure our natural benefit, he did not interfere with our miserable condition [our unwillingness to follow his instructions] and independence. Witnessing and reflecting upon this unprecedented foresightedness, I am forever sold at his lotus feet. What can Śrī Gurudeva do for those who desire to be deprived? To interfere with another’s independence is to lash his very existence as a conscious being, and is fully contrary to Śrī Bhagavān’s desire. Śrī Gurudeva exhibits the pinnacle of service to Śrī Bhagavān, and therefore such interference would be at odds with his nature.

That said, Śrī Guru is bestowing mercy upon his followers even in depriving them so, and he thereby lives up to the title ‘Ocean of Mercy’. Who will understand the hidden intention behind his actions? The way to transform my heart, which is intoxicated by the desire to enjoy mundane sense objects, is vañcayet draviṇādibhiḥ: to deprive me by offering me mere worldly commodities. We have the tendency to fulfil our desires by enjoying the wealth and belongings of Śrīla Gurudeva, and our foremost duty on this day is to cast this habit into the fire of separation from him, thereby reducing it to ashes. During his physical presence, Śrīla Prabhupāda was merciful to me by supplying me with many comforts. Today, in his absence, I no longer receive this free supply, and therefore I feel acute pain in separation from him. If our need for Śrī Guru were based on a feeling of emptiness that came from being bereft of his tutelage, it would be a far superior feeling of separation. 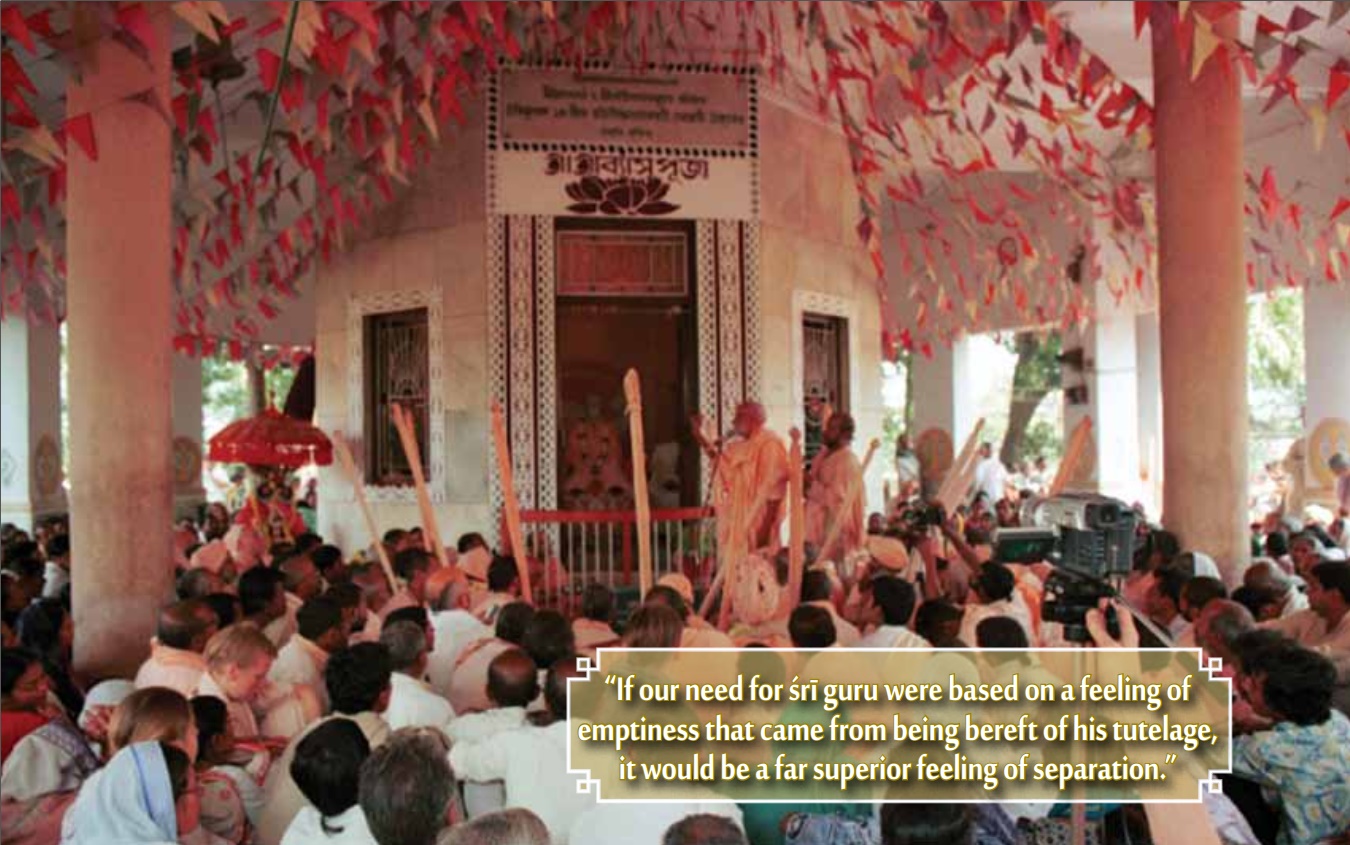 Observing my weakness of heart, Śrīla Gurudeva heaped praise and honour on me, and thus engaged me in service. Encouraging words filled with admiration delight the human senses, and therefore, sadly, I have engaged Śrīla Gurudeva in my own sense-gratification, expecting such words from him. What is more, my foolish mind considers itself to be the sole object of Gurudeva’s praise, which is in fact wholly false, and has thus reached the zenith of pride. Thus, I have buried in the ground the verse tṛṇād api sunīcena as taught by Srīman Mahāprabhu.

Śrīla Gurudeva’s transcendental, liberated position is such that he forever exemplifies the statements “yāṅhā yāṅhā netra paḍe, tāṅhā kṛṣṇa sphure - wherever he looks and whatever he sees reminds him of Kṛṣṇa”, and “yāhāṅ nadī dekhe, tāṅhā mānaye—‘kālindī’ – whenever he sees a river, he sees it as the Kālindī”. This is the nature of Śrīla Gurudeva. Therefore, I, who am like a drain brimming with the foul-smelling sewage of this mundane world, appear to the mahā-bhāgavata to be the most sacred Kālindī, although I am thoroughly aware of the filth in my heart and can never consider myself to be the Kālindī. Not just any mountain is Giri-Govardhana. But the mahā-bhāgavata sees my stony mountain-like pride as Govardhana, although that mountain is hardly Govardhana for me.

Śrīla Gurupāda-padma has made a special effort to help me progress by praising me profusely. Unable to understand the deeply esoteric nature of his heart, 1 have become inflated with pride from receiving this praise and constantly claim it from him. Now, in his absence, my ‘sixth sense’ (the mind) is no longer gratified by his words of admiration, and as I think about this, I long to be with him. But today, on his disappearance day, my duty is to fully obliterate my mountain-like pride by remembering his teachings, which are devastating enough to shake the earth and as grave as a clap of thunder.

The Essence of Śrīla Prabhupāda’s Teachings

When Śrīla Prabhupāda instructed us, it was like the roar of a lion; and when he chastised us, it struck us like a thunderbolt. He used language that made the heart quiver. One principal teaching delivered in this way stirs in my heart today. After reflecting upon our bleak future, Śrīla Prabhupāda disseminated elevated teachings pertaining to the path of sādhana, in an attempt to save us. Foremost among them is to please Kṛṣṇa by performing harināma-kīrtana while remaining in the association of sādhus and Vaiṣṇavas. Indeed, kīrtana of Kṛṣṇa is the only bhajana. This in itself encapsulates the teaching of Śrīla Rūpa and Raghunātha Gosvāmīs.

Those who have compiled the Vedic scriptures have never explained bhajana to mean remaining hidden in a secluded place and gratifying one’s senses by fostering laziness. Those attached to sense gratification, who desire recognition and are lazy, are unable to understand the nature of bhajana. On the pretext of doing harināma, they live in a corner of their homes, which are like dark wells. They consider the mere ‘pulling of rope’, as Śrīla Prabhupāda would call it, to be harināma; and thus they become degraded.

All those who are lazy and weak due to a lack of kṛṣṇa-śakti consider service to śrī guru, who is actively absorbed in serving Śrī Kṛṣṇa, to be karma, or ordinary worldly activity. Their inability to differentiate between karma and bhakti pierces the heart of Śrīla Prabhupāda on his disappearance day with a pointed javelin. If engaging all of one’s senses in the service of Śrī Kṛṣṇa is karma, are we to consider that paralyzing them is bhagavad-bhakti?

Today, on Śrīla Prabhupāda’s disappearance day, my heart is feeling pain as I remember the description of the guru-drohitā, insurrection against śrī guru, of those jīvas who are afflicted with weakness of heart and who crave fame. Śrīla Prabhupāda uses the word ‘seclusion’ (nirjana) to advise us to renounce the association of wicked persons (durjana) and stay in the association of saintly persons (sajjana). All other meanings of ‘seclusion’ are against the Vedic scriptures, against rational thought, and against the missionary spirit that is the most cherished desire of Śrīla Gurupāda-padma.

The request of Śrī Gauḍīya Vedānta Samiti is that you do not engage in behaviour that is adverse to the internal desire of oṁ viṣṇupāda paramahaṁsa-svāmī aṣṭottara-śata Śrī Śrīmad Bhaktisiddhānta Sarasvatī Gosvāmī Ṭhākura. You must all assist favourably to bring about his cherished will. For our welfare, Śrīla Prabhupāda preserved his most prized instructions in the form of a song (duṣṭa mana! tumi kisera vaiṣṇava?). Today, on his disappearance day, let that song become our life and soul.

In this song, Śrīla Prabhupāda has saved, in golden words, the essence of all teachings, so that we may attain service to Śrīmatī Rādhārāṇī in parama-unnata-ujjvala-rasa, the very highest and most dazzling relationship with the Divine Couple. On his disappearance day, we should remember these instructions through the medium of kīrtana. õ