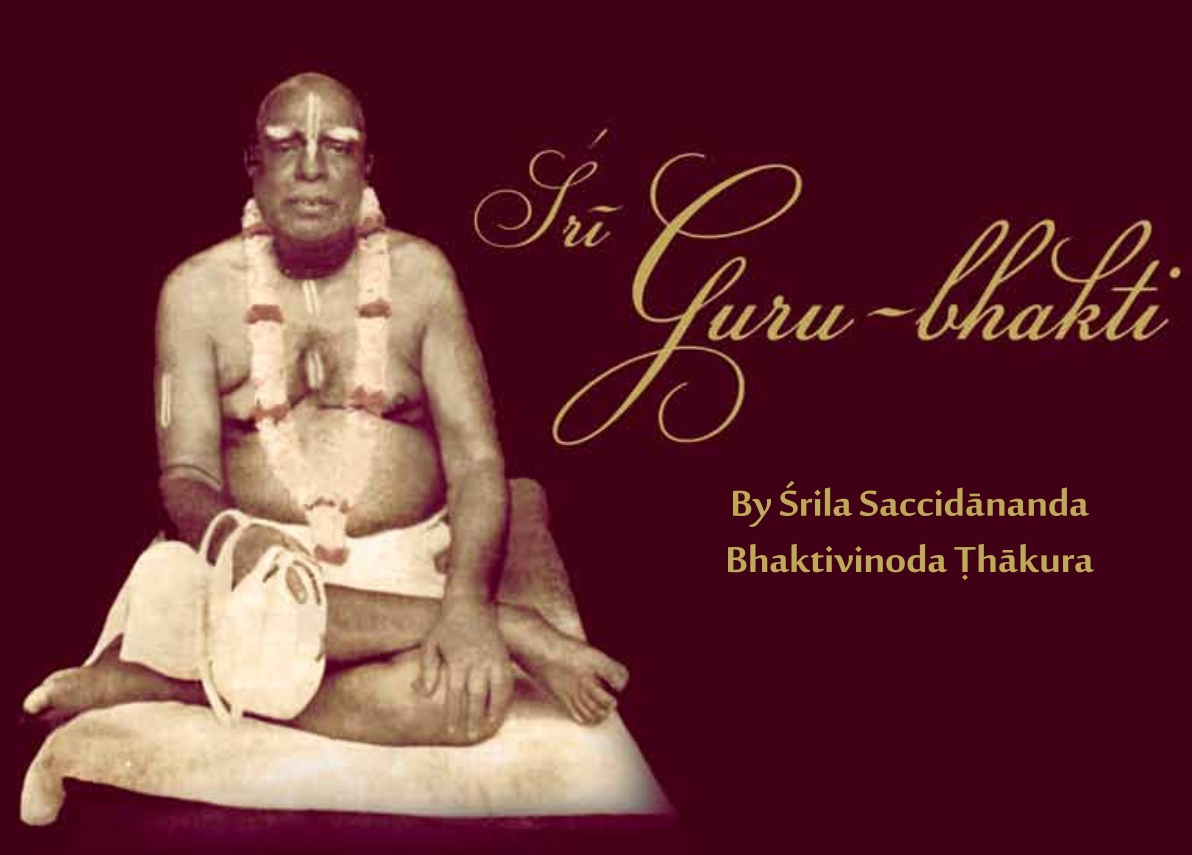 Śraddhā – the Key to True Happiness

The jīva who is blinded by the delusion of māyā and bound in the widespread network of material existence wanders here and there. Having been captivated by the hope for happiness, he searches for happiness in knowledge, intelligence, wealth, honour, etc., but by no means can he make himself happy. In this way, the jīva passes many lives. As a result of accruing great spiritual merit over many births, faith in bhajana is transmitted into the jīva’s heart. His only chance of attaining true happiness is in bhajana. Śrī Kṛṣṇa is Svayam Bhagavān, and the jīvas are His eternal servants. Śraddhā is the very strong and determined faith that by performing bhakti to Śrī Kṛṣṇa, all sufferings are dispelled, and one becomes situated in kṛṣṇa-dāsya, one’s constitutional position as a servant of Kṛṣṇa. With this faith, the jīva soon takes the shelter of the lotus feet of a bona fide guru and attains all types of perfection, solely by the virtue of śrī guru’s grace.

The Real Friend of the Jīva

The boundlessly merciful Vaiṣṇavas are the supreme friends of the fallen jīvas in this world. Knowing the jīvas to be averse to Kṛṣṇa, the Vaiṣṇavas instruct them on bhakti-tattva, the fundamental principles of pure devotion. When faith develops in this, the jīva takes shelter of the lotus feet of a Vaiṣṇava, who now instructs him on bhagavat-bhajana. Then, when the disciple exhibits suitable qualification, having developed single-mindedness and expertise in bhajana, śrī guru bestows his mercy upon him by granting the power to behold the storehouse of transcendence, Śrī Kṛṣṇa. Such is the endless mercy of the Vaiṣṇava.

As śrī guru, the Vaiṣṇava blesses the extremely fallen and insignificant jīva – who is filled with hundreds of anarthas, tormented by māyā in various ways, and completely drowning in the ocean of material existence – with a place at his feet. He accepts responsibility for the jīva’s life, which is presently devoid of bhajana. Inspiring him with the example of his own supremely pure character and strong bhajana, śrī guru captivates the heart of the jīva and transmits potency into it. The disciple imbibes this strength and gradually moves forward along the path of bhajana. Indeed, the mercy of such a guru is boundless, endless and wonderful, and for this reason Narottama Ṭhākura Mahāśaya has written:

He who gives me the gift of transcendental vision and enlightens my heart with divine knowledge is my master, birth after birth. Prema-bhakti, divine loving devotion, by which ignorance is destroyed, emanates from him. His character is eulogized by the Vedas. 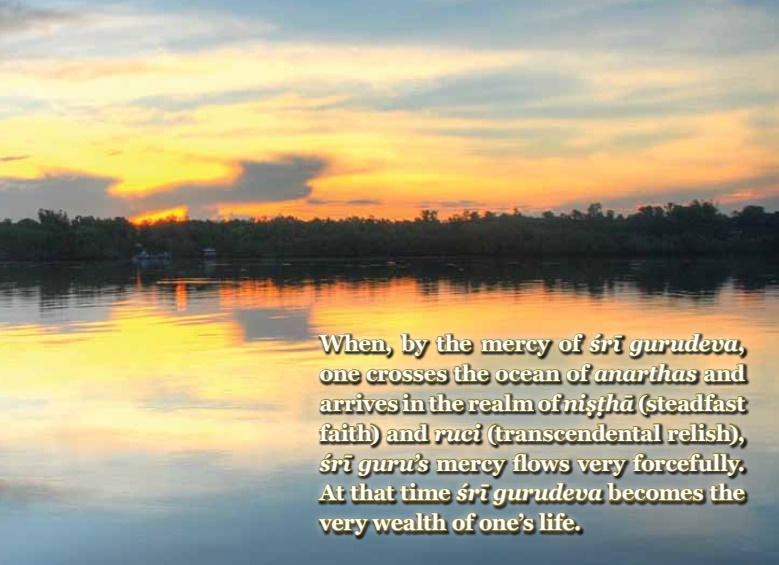 The Mantra Guru and the Instructing Guru are Intrinsically the Same

Śrī guru can be distinguished according to his function as either dīkṣā-guru or śikṣā-guru. Dīkṣā-guru is he from whom the mantra is obtained, and śikṣā-guru is he from whom bhajana-śikṣā, instruction on how to progress along the devotional path, is received. A disciple should show equal respect to both, and he should understand that both are the manifestation of Kṛṣṇa’s śakti, or potency. If he maintains the attitude that they are different, he will be an offender.

Even though I am aware that my gurudeva is the devoted servant of Śrī Caitanya, I am also conscious that he is a complete manifestation (prakāśa) of the Supreme Lord (Śrī Caitanya).

Authentic evidence from the entirety of revealed scriptures declares śrī guru to be identical with Śrī Kṛṣṇa. Indeed, Śrī Kṛṣṇa comes in the form of śrī guru to shower mercy upon His devotees.

Know that the śikṣā-guru, or the instructing spiritual master, is in fact the svarūpa, or intrinsic nature, of Śrī Kṛṣṇa, who manifests Himself as the indwelling witness and as the topmost of bhaktas.

It is offensive to consider gurudeva as the Supreme Personality of Godhead directly. Indeed, such a thought leads to the conception that the jīva and Īśvara are one, which is the philosophy of the māyāvādīs. But if one performs bhakti with the understanding that śrī guru is the special manifestation of Śrī Bhagavān, in other words, that he is His śakti, then there will be no fault. “Śrī Bhagavān, who is the embodiment of prema, has manifested as śrī gurudeva and given me initiation.” Blessed is that disciple who remains fixed in this understanding. Such a disciple then nurtures firm faith in the words of śrī guru and develops unshakeable devotion to him.

The Qualification to Develop a Guru-Disciple Relationship

Those jīvas who possess faith should take shelter of a bona fide guru, with great care and determination. Vaiṣṇava ācārya Śrīla Sanātana Gosvāmī compiled information from various śāstras and delineated the symptoms of śrī guru and the symptoms of a disciple in his book, Hari-bhakti-vilāsa. The purport of these words from śāstra is that one whose powerful character stems from bhakti, who is a topmost pure devotee (viśuddha-bhakta) and who is the best among the bhagavatas (exalted devotees) is alone the guru of the jīvas. And that disciple who is free from sin, pure-hearted and submissive is alone fit to receive instruction. If this guidance is disregarded, it is most certain that anarthas will appear on the pathway of one’s devotion.

Śrīman Mahāprabhu has said in His own words:

Meaning: he who is enlightened in the science of Kṛṣṇa is guru,” and below:

Meaning: when the guru is without bhakti, his disciples will also be like that.” In all respects, Śrī Caitanya Mahāprabhu’s words always hold true. Of this there is not the slightest doubt.

It is said in the śāstra that the guru will examine the disciple for a considerable amount of time, and the disciple will also observe the character of the guru. In this manner, after they apprehend each other’s purity, they establish a relationship. The guru-disciple relationship is not ephemeral, lasting only a few days; it continues to exist even after this life. If, for various reasons, the disciple cannot properly accept the shelter of a bona fide guru, despite having searched for such a guru with great care, he will not be able to maintain unflinching devotion to him. Consequently, he becomes deviated from the path toward the supreme goal, due to the fault of neglect. If the guru is unfit, the disciple, having abandoned him, should accept a bona fide guru. And if the disciple is fallen and śrī guru is unable to reform him, śrī guru can give him up.

It is appropriate for the disciple to follow with determined faith whatever instruction is given to him by śrī gurudeva. If the disciple fails to do so and instead, due to the fault of having unnecessary hankerings, accepts instructions from various other people, he will not be capable of doing bhajana. If it appears that śrī guru has given an order contrary to śāstra, then, with a simple heart, the disciple should openly express his doubts before śrī guru’s lotus feet, so that he will be able to reconcile his understandings with the words of śāstra. But that disciple who does not carry out the direction of śrī gurudeva with particular attention and determination cannot attain his mercy by any means.

Simply by his desire, that gurudeva who is the topmost of bhagavatas (exalted devotees) can transmit potency to the heart of the disciple and thus make him a topmost bhagavata. Naturally, though, the inclination to instil that potency in an unfit disciple does not arise in śrī gurudeva. That disciple who, with great vigilance, carries out the instructions of śrī guru, soon becomes qualified to receive real fortune: the mercy of his gurudeva (guru-kṛpa). Only then can he realize the true meaning of guru-kṛpa.

Self-Satisfaction is Achieved by Serving Guru with Natural Affection

As long as anarthas remain in the disciple’s practice of bhajana, he should continue to move forward on the path of bhajana as instructed by śrī gurudeva, by prudently following the laws and prohibitions of śāstra. When, by the mercy of śrī gurudeva, one crosses the ocean of anarthas and arrives in the realm of niṣṭhā (steadfast faith) and ruci (transcendental relish), śrī guru’s mercy flows very forcefully. At that time śrī gurudeva becomes the very wealth of one’s life. Mamatā, possessiveness, for one’s gurudeva appears in the heart of the disciple, and gradually, one’s attachment to bhajana increases. Consequently, as mamatā ripens and expands, an unprecedented service mood towards gurudeva unfolds, and with great care and attention, the disciple fully offers his life at his lotus feet.

While the disciple’s natural affection for gurudeva has not arisen, it is imperative that he dedicate himself to śrī gurudeva’s service. In this way, he will obtain his mercy. To meticulously obey śrī gurudeva’s every order is his principal sevā. There are many people who do not exhibit any determination to follow the instructions of śrī gurudeva, although they are seen to be quite busy in some way or another, trying to massage his feet or fan him. If these services are performed with a natural, inborn affection, much benefit is derived. But if, while doing them, the disciple carries some insincerity within his heart that manifests as the hope that he will become dear to śrī gurudeva by that particular service, he will receive no benefit at all, for it is not possible to endear oneself to gurudeva in that way. Rather, by carrying out the orders of gurudeva, great satisfaction is conferred upon the disciple. Certainly, though, it is not inappropriate to massage his feet or fan him, and the result of such service is that strength develops to follow his instructions with determination, which is the sole means to obtain his real mercy. Ultimately, self-satisfaction is only achieved when one performs such service with natural affection.

Translated from Śrī Gauḍīya Patrikā - Year 12, Issue 10
(First published in English in Rays of The Harmonist No.7, Winter 2000)