Who Can Be a Real Guru?

A Conditioned Soul is Never Equivalent to Guru

A person perceives the significance (gurutva) of a substance according to his qualification. Our endeavour to acquire objects with our senses often meets with failure, and we give up trying. Our senses are especially incapable of attaining that which is beyond this material nature. For this reason the scriptures state:

The Vedas and Purāṇas assess spiritual substance as being perpetually beyond the comprehension of mundane senses.

There is a difference of heaven and hell between my narration of the glories of the spiritual master and the narration of one who is really tattva-jña, well-versed in the conclusions of the scriptures. A soul who is conditioned carries egotistical pride in being a disciple; therefore, his descriptions of his gurudeva’s glories lack the potency of one who is a true disciple. My chanting of the holy names of the Lord does not have the same quality as the chanting of a truly qualified person, and the hari-kathā spoken by an unqualified person such as me is vastly different from the hari-kathā narrated by one who is actually qualified.

How Many of Us Are Real Disciples?

All of us have accepted a spiritual master, but in doing so, have we acquired the spiritual master’s qualities? Among a guru’s thousands of disciples, how many actually realize his significance? This calls for serious contemplation. Not all disciples of a spiritual master share the same qualification. There is great variation.

To formally accept initiation from the spiritual master and to take initiation from him in the true sense are quite different. The disciple receives the dīkṣā-mantras from śrī guru, and when he becomes qualified, he too can become a spiritual master. There is no fault in his doing so. But if the disciple himself accepts disciples before he is qualified, he is not acting in accordance with his level of realization. This is the verdict of the scriptures. It is important to always consider a person’s qualification.

Śāstra tells us that ordinary sound vibration (śabda-samanya) and transcendental sound vibration (śabda-brahma) are completely different. “I am just giving the same dīkṣā-mantras that my gurudeva gave me, and therefore, the effect will be the same.” But this is not so at all. If one accepts formal dīkṣā and does not endeavour to advance, he cannot become a real disciple. Only that disciple who possesses the qualities of a guru as described in śāstra can become guru.

A wise and self composed person who can subdue the impetus to speak, the agitation of the mind, the onset of anger, the vehemence of the tongue, the urge of the belly and the agitation of the genitals can instruct the entire world. In other words, all may become disciples of such a self-controlled person.

Such a genuine guru can make the whole world his disciple. He is a gosvāmī; his senses are under his control. One who is a godāsa is subordinate to his senses. Godāsa means ‘a slave to one’s senses’ and gosvāmī means ‘a master of one’s senses’. Their meanings are opposite. Now, when I sincerely analyse my own qualities, the daring concept of becoming a guru is eliminated. If I contemplate becoming guru because I am tempted by the fame and worship that this position easily awards, I will never be able to perform the true function of a guru. 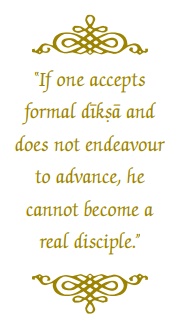 A Guru Practices What He Preaches

Who is a Vaiṣṇava?

[Desires for] money, women and fame are like tigresses. Those who have relinquished them are indeed Vaiṣṇavas. Vaiṣṇavas alone are pure and detached devotees who can conquer material existence.

With this qualification, a genuine guru can make disciples throughout the world. Simply chanting the mahā-mantra -

does not indicate a person’s gurutva, qualification to be guru.

One must teach dharma to the jīvas by personally practicing it. If one does not practice, he should not teach others.

An ācārya is one who fully understands the conclusions of the revealed scriptures and whose behavior reflects his deep realization. He is a living example, for he teaches the meaning of the scriptures by both words and deeds.

The above ślokas were spoken to emphasize that one who assumes the position of guru and gives instruction to others must himself be following that instruction. If he does not, his preaching will never be effective. If a person takes intoxication and then tells others not to do so, his instruction will carry no potency.

One who is fully conversant with tattva, philosophical truth, knows that the process of dīkṣā can awaken a person’s transcendental knowledge and annihilate the reactions of his sins.

One cannot become a guru just by memorizing the verses of scriptures, such as the Vedas, and then concocting an explanation for them.

Eloquent discourses, outstanding intelligence or extensive and astute hearing will not enable one to attain the Supreme Personality. The Supreme Lord selects who He wants to attain Him. Those persons alone are successful and receive His darśana.

We need to deliberate on how much of this transcendental knowledge we have absorbed. Many devotees may take shelter of the same spiritual master. Among them, some have been illuminated by transcendental knowledge, while others are still covered by ignorance. It is inappropriate to blame śrī guru for this. Such a difference is based on the different qualifications and endeavours of his disciples. A teacher may give the same lesson to all students, but one student tops the class with excellent marks, while another fails miserably, and yet another barely passes. The teacher has taught them equally well, but their results vary according to their ability. In the same way, one cannot become a spiritual master simply by being a disciple, unless one has the necessary qualification.

Śrī Guru is Endowed with Realizations

The Upaniṣads say “apāni apādau – the supreme entity (brahma) has no hands or legs”. This simply tells us that He does not possess material hands or legs.

In fact, the verse apāni apādau has been spoken to establish His transcendental nature and make sure we abandon our material conception of Him. It does not mean He actually possesses no hands or legs. He is described as having a form of eternality, cognizance and bliss (sac-cid-ānanda).

What is the meaning of a form composed of sac-cid-ānanda? We have heard this from the lips of the previous Vaiṣṇava ācāryas and we are repeating that, but in actuality we have no realization of whether that form is soft, or hard like wood or iron. Only those who have experienced His form can become a guru. One who claims to be guru without such realization is a false guru and his attempts at being a guru will fail.

“Oh!” the person cries, “I am embracing Lord Jagannātha!”

But what was it like? Did you feel Him burning [in separation] like fire? No, because you do not have experience of Him.

Or someone may say, “I touched the deity of Kṛṣṇa. How cold it was. Since the deity is made of stone, touching Him is like touching ice!”

With each morsel of food that a hungry person eats, he simultaneously experiences satisfaction, nourishment and relief from hunger. Similarly, a surrendered devotee, who is engaged in the performance of bhakti, simultaneously realizes his worshipful deity, strengthens his relationship with that deity and becomes detached from this temporary world of material relationships.

This is the barometer of progress for a person claiming to be performing bhakti. Has he left material enjoyment? Has he become naturally renounced? Is he still fascinated by material objects pertaining to taste, smell, touch and hearing, or to money, women and so forth, and thus desires to enjoy them? Do we perceive these objects in the same way as one who is tattva-jña and use them accordingly?

The following example will clarify this. I may address a lady as “Kṛṣṇa dāsī”, but merely calling her Kṛṣṇa dāsī does not mean I actually perceive her as such. Am I instead nurturing the desire to make her my own servant (dāsī)? How can anyone with such desires in the heart become a guru? When transcendental bhakti arises in the heart, one will have realization of the Lord.

When a person performs bhakti and develops a relationship with the Lord, he feels attachment to Him and considers Him to be his dearly beloved. He feels related to the Lord in the mood of servitude, friendship, parenthood or amorous affection. It is then that he realizes the tattva of the Lord.

If someone were to tell me that they had seen Lord Kṛṣṇa lying lifeless on the ground, I would not cry or feel upset, nor would I undergo any internal transformation.

But if someone were to tell me that my wife had been hit by a bus and he had seen her lying dead. I would immediately begin to lament and weep. We would not be so affected if Kṛṣṇa left us, and yet we claim to be devotees. When the gopīs heard from Nārada Muni that Kṛṣṇa’s severe pain could only be relieved by a devotee’s foot-dust, they immediately gathered up a full bag of foot-dust and said, “Take it right now! Even if we have to go to hell forever, we do not mind.”

Have we developed such a relationship with Kṛṣṇa, or such a service attitude to Him? We keep an account of the money we give to gurudeva and consider ourselves great servants! Does a person keep any account of the money he gives to his wife? Can you show us that account? “Oh, so am I not a guru-sevaka? Do you know not how much I have served him?”

We have a barometer for gauging bhakti. A bona fide guru is completely detached from anything material and he is fully acquainted with the tattva-vastu.

Originally published in English in
(Rays of The Harmonist, Issue No. 15, Kārttika 2005)